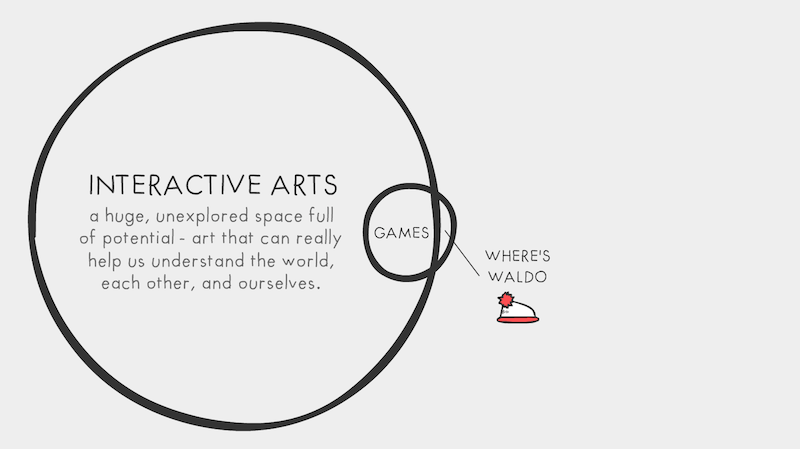 Interactive Arts. That's what I want to explore more of in 2015.

Like looking through a keyhole on a locked door, Parable of the Polygons gave me a peep into the wonderous mysteries beyond. And that excites me. I am trying very hard for this metaphor to not sound like I'm a peeping tom.

Polygons infused interactivity into the blog post - hence, why we called it a "playable post". And now, that's got me thinking about all the new mediums we could create, by meaningfully merging interactivity into old mediums! Interactive comics. Interactive music videos. Virtual, augmented, alternate realities. All these new mediums, and the new functions they could perform. Storytelling. Education. Fostering better, closer, human connections.

That's what Interactive Arts could be.

Why explore the Non-Game parts?

All the possibilites of Active Arts, and almost everyone who gets into it, goes into Games. Which as of right now, is an incredibly crowded space. Don't get me wrong - I still believe Games are a powerful medium and we've got lots left to explore within it, but the Non-Game parts of Active Arts seem like a vast unexplored field full of gold mines, low hanging fruits, and not people crowding around everywhere. Again, I'm not the best at metaphors here.

"Game" is a loose form, of course, but there's still a whole bunch of expectations and conventions that constrain it. Specifically, the idea that games should be challenging, and provide escapist "fun" based on mastery of a system. Which is great, if that's what you want, but it's not what I'm currently interested in making anymore. There's just so much more that "playing with systems" can do -- create moods, help peeps understand the world, help peeps understand themselves -- that it seems a crying waste to limit it to FUN, FUN, FUN

When I made Coming Out Simulator 2014, I expected peeps to dismiss it as "not a game". What I didn't expect was for peeps to praise it as "not a game". Most people see games as inherently trivial, even games' most, uh, ardent supporters. (e.g. stop getting so worked up, SJWs, they're just games) One reason I think Polygons was my most popular work was thanks in part to our not explicitly calling it a videogame. The point is - simply calling something a "videogame" automatically limits its audience. So, gonna call 'em something else... like "Active Art".

Games are a crowded, creatively constraining, and frequently hostile space. Somehow more hostile than the Open Source movement, and that's saying something. As much as I love Games, and grew up personally and professionally within that space, I need to get out, at least for now.

Heck, I'm not really leaving that far. I'll be on the periphery, making active arts in forms nobody's seen before, that reach and enrich a wider audience. And most likely, the Active Art movement could get the world to recognize Games as a powerfully medium for storytelling, education, and other things beyond trivial "fun".

This is a goodbye, and hello world.

“They want to keep climbing that ladder, they want to go higher and higher, they want more depth in their games. And think about how that compares to my dream. Because I want is to encompass the broad range of human experience and emotion. What I want, is breadth, what the customers want, is depth. I am at cross-purposes to my audience. And there is only one conclusion I can draw. I have to leave. I don’t fit in here anymore.”

And then he ran out of the room with a foam sword, screaming: