This is a thing I made.

There are reasons for this thing I made.

Here are three of those reasons, in order from best to worst.

Stop Drawing Dead Fish blew my mind, as do all of Bret Victor's talks. In this presentation, he shows off his prototypes for new ways for creating animations on the fly - more like digital puppetry, really. Sure, it could be used as motion capture for 2D animation, (which is highly practical!) but imagine -- being able to make digital art in real-time, improvized, using your full hands and body... playing a computer like a musical instrument.

And why limit it to just face tracking? On your laptop, you'll have a keyboard and mouse - these could be used for extra on-the-fly actions, like body poses or instant confetti. And why limit it to just replacing the head? It could have more, a full body and background, or less, just the swaying mane. And why just animations? What if the voice actress of Pinkie Pie did a live Q&A with her as Pinkie Pie?!

THE POSSIBILITIES ARE ENDLESS

Despite (or maybe because) having grown up with computers all my post-wetting-the-bed life, this idea had never crossed my mind. To take a metaphor from David Foster Wallace's speech, This Is Water, dead fish was my water. 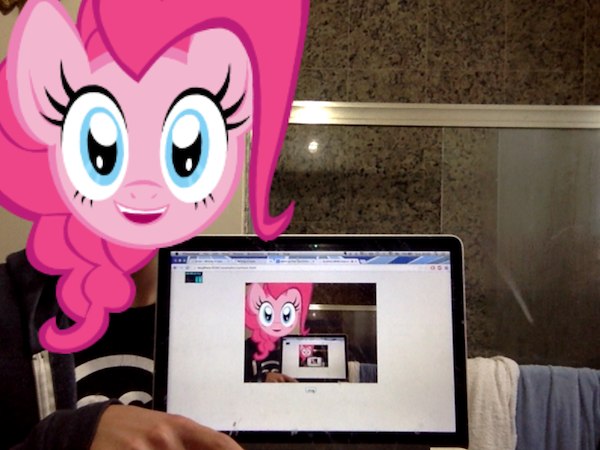 The first reason also ties into another pseudo-practical application: vlogs and videochats. I felt great crafting together my animated 2014 In Hindsight vlog, and I was glad to see it emotionally resonated with people. That said, it took ages to make. And by ages I mean half a week.

But if I have a realtime digital puppet, I can pump out semi-animated vlogs more frequently! And no, I don't want to record my actual face. I mean I'm cute as hell, but there's just something psychologically different about having a live video of me vs. a digital avatar. Plus, it would be a cool video gimmick showing off my mad coding skills. (i.e. looking up Stack Overflow every 10 seconds)

There's another cool application - augmented videochats. It could be a cool novelty, and though I haven't tested it yet, it seems like it should be really easy to set up with Skype! Since this is a web app, you'd just need to open up your browser, and screenshare that window. No need for sketchy downloads or plugins that have access to your webcam, and are totally not streaming it to some perv's house. 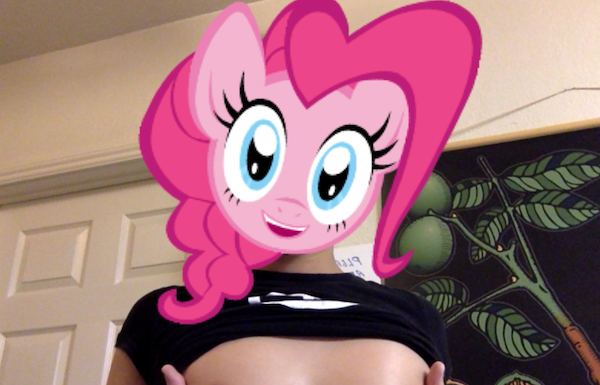 If nudes get streamed to a perv's house, it should be consensual. And hot diggity damn would I consent to this, for SCIENCE.

There are people who would pay top dollar to talk dirty to Pinkie Pie. And why stop there? The furry fandom would absolutely love this - and then for everyone else, there's roleplaying fantasy creatures, and roleplaying as celebrities that people wanna see strip for them. Augmented sexuality!

And if other people were to use this web app for sexy livestreamings - and of course I'd open source it, I'm not gonna selfishly keep these economic opportunities to myself - the face-covering aspect would protect their privacy. What if the AR face slips? There could be a 10-second delay on the livestream, so they can press a button and pause the feed immediately. See? I have thought this through.

There's, of course, the normal set of revenue sources. Tipping, and private shows. And you'd feel better about it, coz with artsy AR camwhores, you'd be supporting the future of technology and independent artists. But! The big money for me would be commissions - making custom AR puppets for the specific fantasy creature your crotch desires. (Ooh, a collaboration with Slipshine, perhaps?)

Finally, if I get any VC capital for this, I'd be able to call it a "seed round", wink, make a silly grin, and wait for groans from the audience as the pun finally sinks in.

The pun is semen. Seed round.