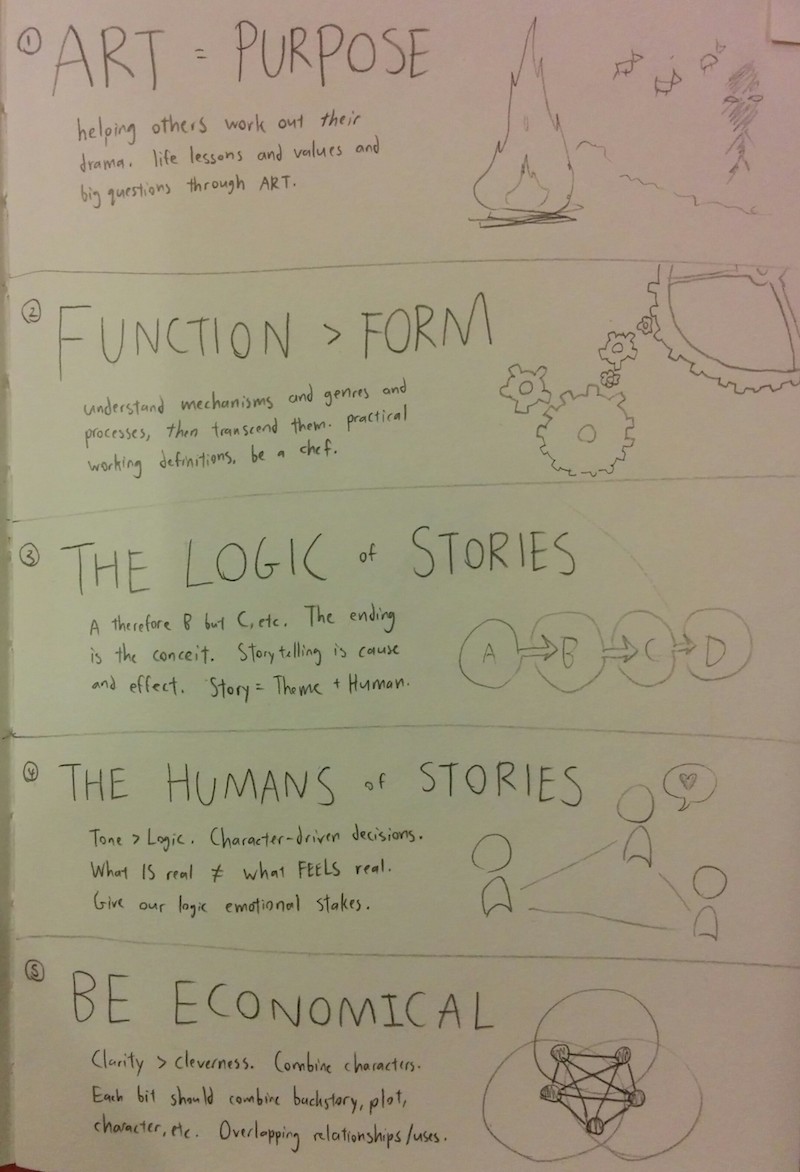 I first found out about Film Crit Hulk through his long, empathetic, and deeply personal piece on GamerGate. All his other essays are just as thoughtful. The Hulk is now my all-time favourite media critic, and that's only solidifed by his new book, Screenwriting 101.

The following is half-summary, half-personal-reflections on Screenwriting 101. The book doesn't just cover screenwriting, (in fact, that only takes up one chapter, near the very end) it covers everything from narrative structures, to media theory, to the very purpose of storytelling itself.

As someone who both makes and eats stories, (mostly through my chosen medium, videogames) this was one of those rare books that will change my life.

But after I made Coming Out Simulator 2014, and received hundreds of personal, touching fanmail in response... I finally realized I could make something meaningful with this. I was just starting to realize the power of stories, of art, of empathy. And it was Hulk's book that finally made me appreciate the full power (and responsibility) that we storytellers have.

Is your work enriching, or escapist? Art, or pornography? Most mainstream media today is indulgent, and while that's totally fine when consumed responsibly, it is totally not consumed or created responsibly. We need less art indulging us with what we want, and art that gives us what we need.

Good stories are nuanced fables. The earliest stories, like Aesop's Fables, were meant to get people to really internalize values like work ethic, (Grasshopper & Ant) persistence, (Rabbit & Turtle) and mercy. (Lion & Mouse) As simplistic and over-moralizing as Aesop's Fables are, you can't deny that they've survived the test of time, and are still so embedded into our Western culture that I can simply name a pair of two animals and you'll know exactly which fable I'm talking about. Point is, the best stories of today do the same thing, but with more nuance.

These stories get us to really, truly understand their messages, and better us as human beings.

"That's not a game!" goes the cry of angry gamers, in response to Depression Quest, Gone Home, Dear Esther, etc. As if there's any "purity of the medium" to protect in videogames, a medium that's literally the combination of video and games. (And even if there was, it sure as hell doesn't justify credible death and rape threats towards the developers.)

That said, while I think "what is a game" is a useless and distracting question, there are many things about the medium of interactivity that I'm sad to see a lot of my peers dismiss. There's this idea floating around, I guess, that interactivity is fundamentally poisonous to a good narrative. I feel like that's a waste -- we should be discovering and inventing ways to enhance a narrative with interaction, rather than just assuming that story & gameplay will always be at odds with each other.

So... that's my paradox. I don't care "what a game is", but I care about how a game uses its mechanics? The Hulk finally gave me the words to describe my approach: I value function over form.

Unlearn some forms. Learn new ones. Hulk tears the 3-Act Structure and The Hero's Journey a new one. Then, he gives us better mechanisms, like Cause-And-Effect storytelling and Dan Harmon's Circles, describing their functions, their pros and cons. I believe that in videogames, we seriously, seriously, seriously have got to move on from "challenge-based gameplay" as a default. (Also, the entire gamification movement is based off the form of games, the artifacts like "achievements" and "levels" and "highscores".)

Learn from everything, even the bad stuff. Even though I dislike Michael Bay's films, the Twilight series, and Call of Duty, I can't deny they are popular. And it's a fault of us artsy types to simply dismiss their success as "people are dumb". In fact, we're morally obligated to really pin down what makes them popular, what functions they serve, and re-use those functions to spread good art amongst the mainstream.

Don't be contrarian. Don't be cool. Okay, I will admit that earlier versions of my game, Nothing To Hide, had a story with lots of non-linear storytelling and random character deaths, simply coz I thought it was "cool". Point is, you should always know (and have a damn good reason to back up your choice) when to obey the rules, and when to break the rules.

(For what it's worth -- I love Depression Quest and Gone Home. Their minimalist mechanics do enhance the core theme. DQ's "removing your choices" mechanic mirrors how clinical depression actually works, and GH's "walk around and handle stuff" makes the game feel like a modern-day archeology dig. And while Dear Esther, IMHO, felt like pretentious purple poetry, their developers redeemed themselves in my eyes with A Machine For Pigs)

3. The Logic of Stories

As said before, Art = Purpose. Stories are how we convey values, beliefs, and core human questions. Treat your story like a persuasive essay. A logical argument imbued with human emotions, making a strong case for its conclusion, your core message.

A therefore B but C. Stories should show cause-and-effect, and each plot beat should be connected with a "therefore" or "but", not "and thens". (unless you're doing an experimental dream-logic film like Eraserhead) This is a common rookie mistake, one I've made a lot. Also of note is that videogames, my chosen medium, are all about cause and effect - I'm excited to discover how I can combine the cause-and-effect of story mechanisms with game mechanisms.

The ending is the conceit. After a whole story setting up your premises, and going through your logic, you finally get to the conclusion. The main point you were leading up to all along. The ending should be your point to hammer home the point, not to just "wrap it up" in a neat bow because "it's a story".

Same rules of persuasive logic apply. Strawman arguments lead to strawman characters, cliché and forgettable "bad guys". Have characters with several valid worldviews, and then through conflict and negotiation, with each other and the world, they come to realize a bigger truth.

4. The Humans of Stories

Explore logic through humans. The difference between a dry step-by-step logical argument and a compelling story is having characters go through the emotions and messy discovery of the logic.

Give the logic emotional stakes. The Black Swan shows you two things about the main character - the passion she feels for her art, and the horrifying mental damage it does to her. Without these fucking high emotional stakes, the film's core message of "balance your work and personal life" would feel trite and toothless. (it certainly seems so when I reduce it like that, no?)

Characters should drive the plot. A big rookie mistake is to just have things happen to the characters, completely ignoring the agency that real people have. Sure, an external plot device works once in a while -- even Deus Ex Machina can be used well -- but the main story should still be driven by people.

Tone consistency > Logic consistency. Plot holes aren't really that important, only unless they take you out of the moment while in the moment. (as opposed to thinking hard about it several days later) Also, go ahead and take an artistic license, because what IS real =/= what FEELS real.

Clarity > Cleverness. A great anecdote Hulk gives -- Finding Nemo originall had the father fish's backstory 2/3rd into the script. It was meant to be an "a-ha" reveal for why the father was so overprotective. But, y'know, without that info upfront, audiences just hated the dad fish for 2/3 of the film, and the reveal didn't change much. In the end, they chose clarity over cleverness, and put that backstory scene in the very beginning.

Things should serve overlapping functions. The best example I can think of actually comes from games -- GLadOS. Take for example her line, “any contact with the chamber floor will result in an unsatisfactory mark on your official record, followed by death.” Not only is this a tutorial, it also characterizes her as cold, adds to the world as messed-up research lab, and is great deadpan black comedy. Four functions, one line. That's impressive.

Combine characters for 3D people. Kind of an extension of the previous section. A first draft of a story usually has characters that only serve one or two functions. One way to fix this is to combine these characters, thus creating fleshed-out 3D people. (This is also a trick game designers do. The first draft of the mechanics will have many one-function objects, and a good way to resolve it is to combine it with other objects, so that the mechanics feel tighter.)

the ending is the conceit...

I learnt a lot from reading Hulk's articles and his book. I learnt a lot more from summarizing it into the drawing seen above. And again, I learnt even more by re-expanding on those ideas, and directly applying them to my personal life and work and art. I feel re-invigorated. I feel like I can truly affect people with my games, my stories, my fables. I can change hearts and minds.

A story has a message.

A story is a persuasive essay. The premises and logic is played out by characters, and given emotional stakes.

A story does this concisely and vividly, to really get us messy humans to internalize what would otherwise be a boring, didactic message.

A story is about people.

A story can make us better people.