When you're overwhelmed with over-philosophical questions about life, there's only one thing to do: make a graph.

Here's a totally scientific graph of all things people make. Each dot is a thing. The x-axis is how many people it reaches. The y-axis is how valuable it is to each person it reaches: 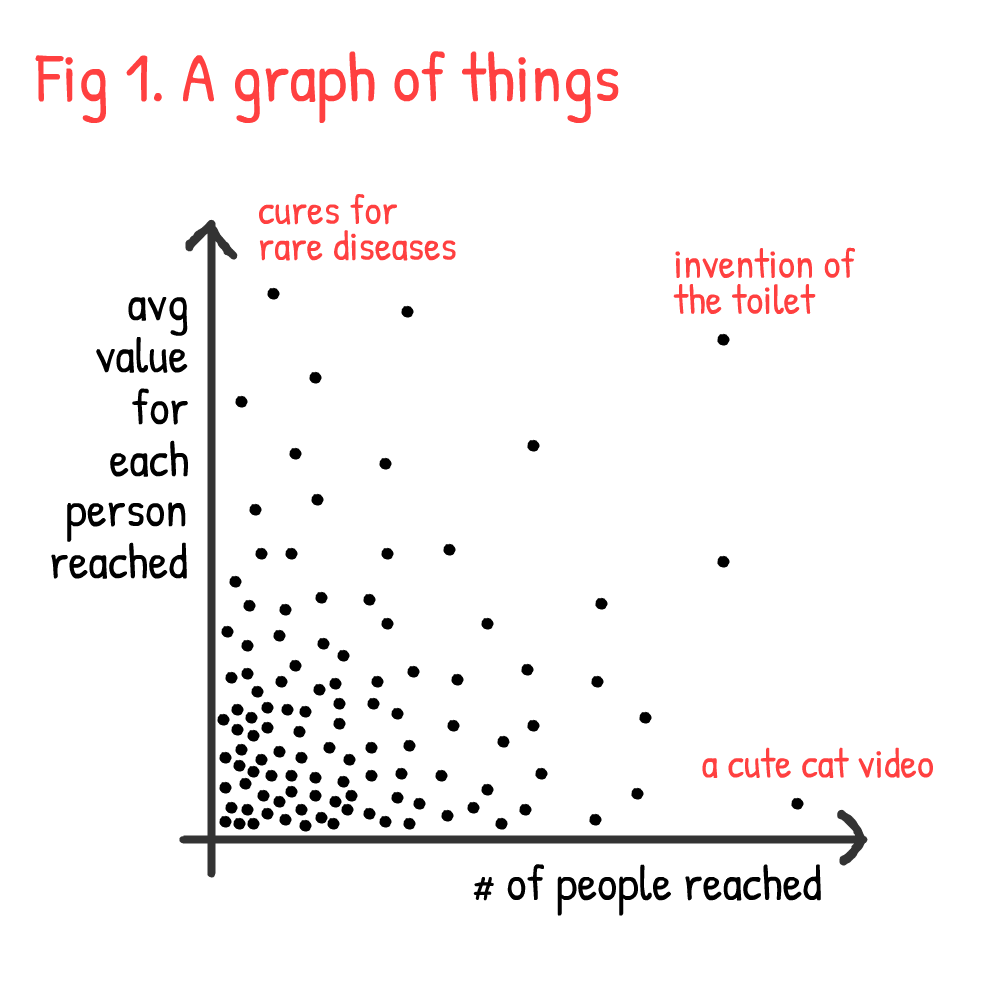 (not shown: things with negative value)

Let's narrow this down from "all things", to just "educational things": 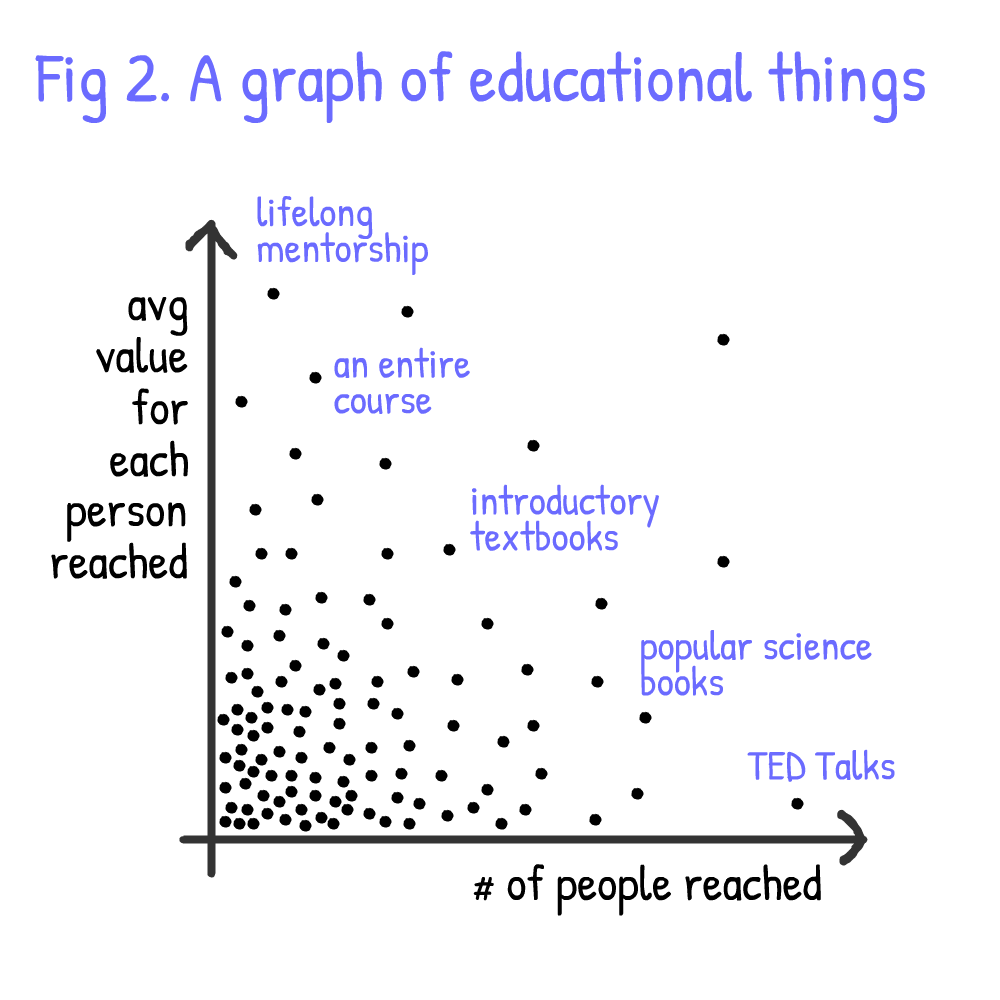 (edit: A reader pointed out I've made a shaky assumption – that "value" is a single dimension. Fair enough! For now I'll bite the bullet and say, “all models are wrong but some are useful”)

Note that there's a soft tradeoff between reach & value. A TED talk can reach millions, but will "only" be an introduction. A lifelong mentorship with a world-class expert can be incredibly valuable, but will "only" scale to a dozen-or-so people. It's not impossible to have high reach + value, but it's incredibly rare.

Reflecting honestly on my past work, I think this is my graph:

First off, Sturgeon's Law: 90% of everything is crap. Most of my early work (and some of my recent stuff, like Joy.js) is crap. And that's fine! To quote Jake the Dog, "Dude, sucking at something is the first step to becoming sorta good at something."

Second, my non-crap stuff is in the bottom-right corner – the land of TED talks, pop-sci books, edu-YouTube. That is: lots of reach but "only" slightly helps each person it reaches. And that's also fine! I think "help many a little" and "help a few a lot" are both good strategies.

What do I mean? Here's a graph:

Yeah. That totally makes sense, and not me forcing a mathematical metaphor.

That said, I do want to explore other parts of that curve: something more niche, but also maybe more value-per-person. That's why, in June, I asked you for help! I posted a poll on four ideas for explorables. Each explorable's goal was to teach a specific skill.

I then took time off to set up & run the Explorables Jam – there's 20 new explorables to play/learn with! – but, honestly, I was stuck on Learning How To Learn.

Why? It was too general. I tried teaching about all learning: learning math, learning art, learning habits, learning motor skills, learning to overcome phobias... I was reaching for too much! The only things I could say that applied to all of them were banal platitudes.

In other words – or in a picture – my "total value" rectangle was too flat:

In physics, Pressure = Force/Area. I could try to increase my Pressure (my social impact) by increasing my Force – but I'm already at my max for a single person – therefore, the only alternative: I had to decrease my Area.

I had to narrow my scope.

But narrow to what? What idea in learning was simple, valuable, yet relatively unknown to the world, and thus could benefit most from a fun, accessible explorable explanation?

You guessed it – I drew a graph:

Spaced Repetition. That's what I should've done, and what I've been quietly working on the last three weeks! I should've shared more progress with y'all, but I wanted to wait until I had something interesting to show.

(if you can't see the GIF, try this link)

My Spaced Repetition explorable will be out end-of-September. Sorry again for being quiet about what was happening behind-the-scenes, but: 1) I hope this post explains why I rebooted the project, and 2) I promise to share more behind-the-scenes posts from now on!

(P.S: If you want to see the remains of Learning How To Learn, here's a link to a simulation of Mihaly Csikszentmihalyi's "Flow", and a clone of Flappy Bird. Open-source code is here. Feel free to salvage the scraps!)

I'm excited to share Spaced Repetition with you next month, and I hope it's a good value-rectangle! Thank you all so, so much for supporting me, encouraging me, and sticking with my indecisive butt.

(this navel-gazing was originally posted on my Patreon, where you too can help me explain things with interactive sliders & bad drawings)