Rewriting Nothing To Hide - moral ambiguity 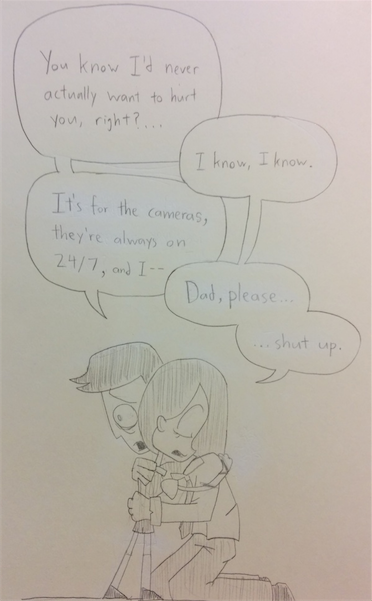 I'm trying a new story angle for Nothing To Hide. I made a short comic showing a father/daughter relationship strained by a discipline- and surveillance- obsessed world. Unlike the demo, Poppy's no longer a scared little kid, and Gardner's no longer the Designated Bad Guy™. Everything is now... complicated.

Give my short comic a read!

Of course, it's still a rough sketch with flaws. If cameras are on 24/7, how are they having that conversation at the end? (someone from Twitter suggested that only politicians get privacy, and limited amounts at that) Another thing is that caning might be way too over-the-top. (a thing I did not know, having grown up in Singapore where caning kids is totally normal)

But all the fans & friends I've shown this to so far loves one thing: the moral ambiguity.

Gardner genuinely cares about Poppy. He wants to win the election so he can give his daughter a better life, but to do that, he has to hurt her. The political pressure of his own party and voters demands that he must. And even though Poppy understands and accepts it - she's the one who later comforts him - it still tears him up inside.

I want this kind of moral ambiguity in Nothing To Hide.

We face hard choices when everything we say and do is under constant scrutiny. You're forced to hurt yourself & the people you love, in order to fit the expectations of your watchers, and avoid legal/societal/economical consequences. For example:

In a world without privacy, these are the kinds of decisions we can't escape.

Nothing To Hide can explore these choices by showing characters struggling with them. But as a game, it can force you to make morally ambiguous choices, too. Don't worry, I'm not going to add "CHOOSE A OR B" popups. You'll be able to make choices using the existing game mechanics. I've got a few ideas that I'll flesh out in a later post!

What are your thoughts on all this?

The short comic's story? The new character relationships? The hard choices a person without privacy has to make? Please let me know! It's your feedback that has really shaped this game to what it is today, and what it's going to be.