This week, I went to this small two-day workshop for journalists to learn about Systems Thinking, and to figure out how to apply it to their own work! Here are my messy sketch-notes, with some personal reflections. 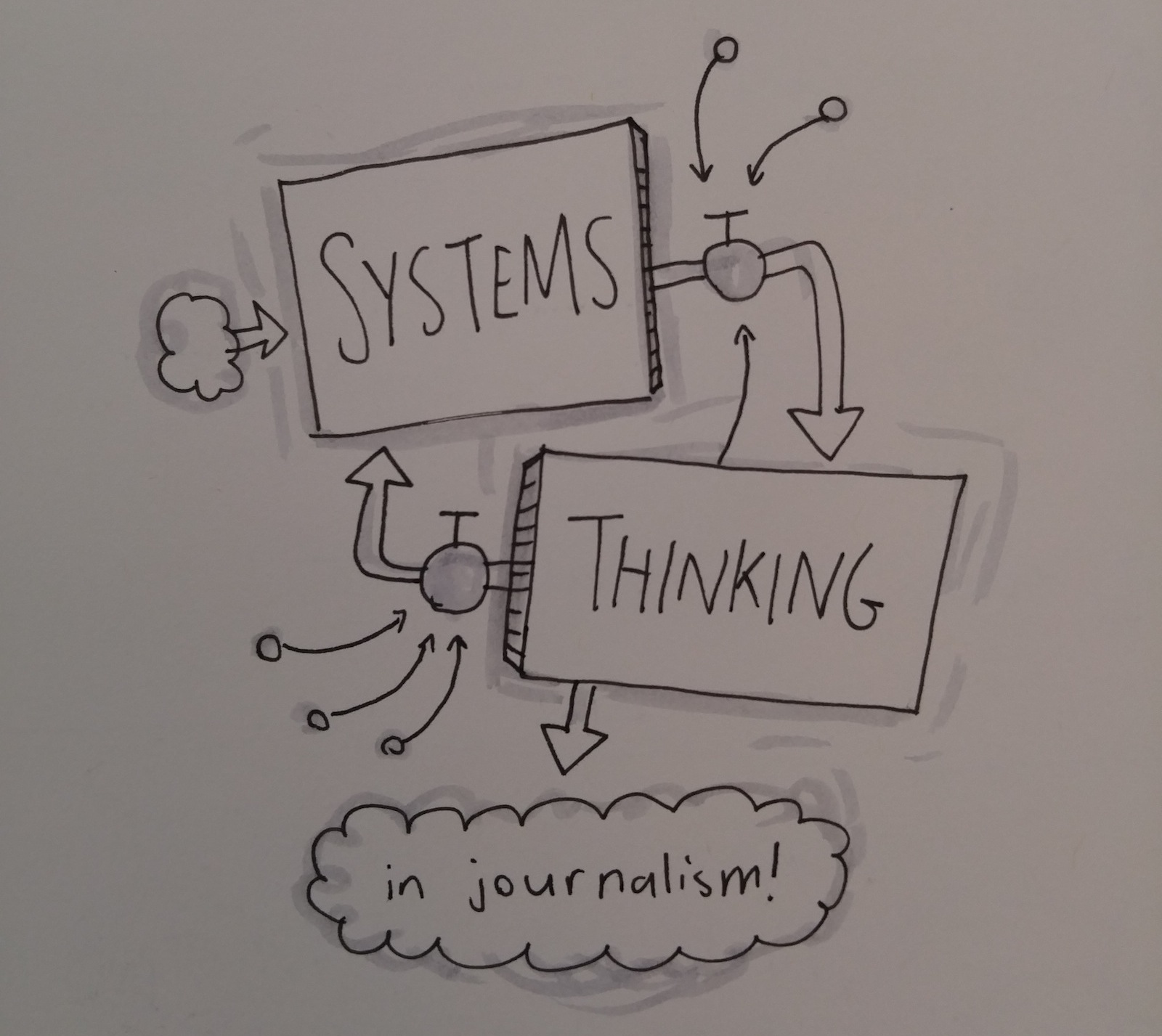 Good news & bad news – they skimmed over the basics of Systems Thinking. I already knew a lot about it, so I got a lot out of the workshop, but the other journalists in the room who were totally new to the concept may have been lost. So, before I get into my notes + reflections, here’s my quick intro to what Systems Thinking is, by contrasting it to the conventional mindset:

CONVENTIONAL THINKING: linear cause-and-effect
(A causes B causes C, and so on)

SYSTEMS THINKING: nonlinear cause-and-effect
(A affects B, but B can also affect A. That is, feedback loops – like the vicious cycle of an arms race, or the balancing forces of ecosystems)

And Systems Thinking peeps also usually use visual diagrams to map these feedback loops. For example, here’s one on drug use, mental health, and criminal justice: (the Snowballs are loops that compound/reinforce something, the Seesaws are loops that bring back balance) 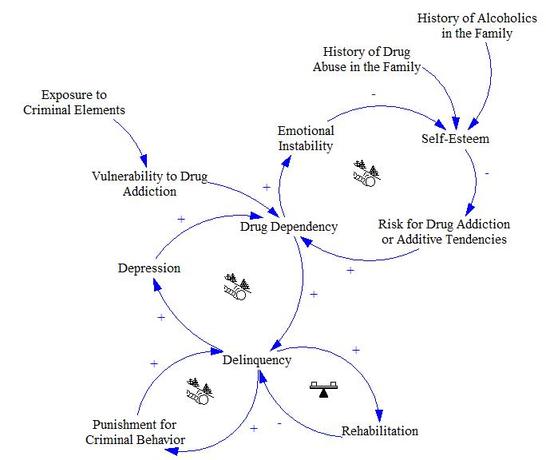 But this nonlinearity makes these kinds of systems hard to analyze (with traditional methods), since there no longer is any one “root” cause, if all things can affect all things. Lotsa systems are like this – political, economic, societal, etc… all ripe topics for a journalist to pick apart!

Alright, now with that super-short intro out of the way, here’s a two-page summary of my sketch-notes from the workshop: 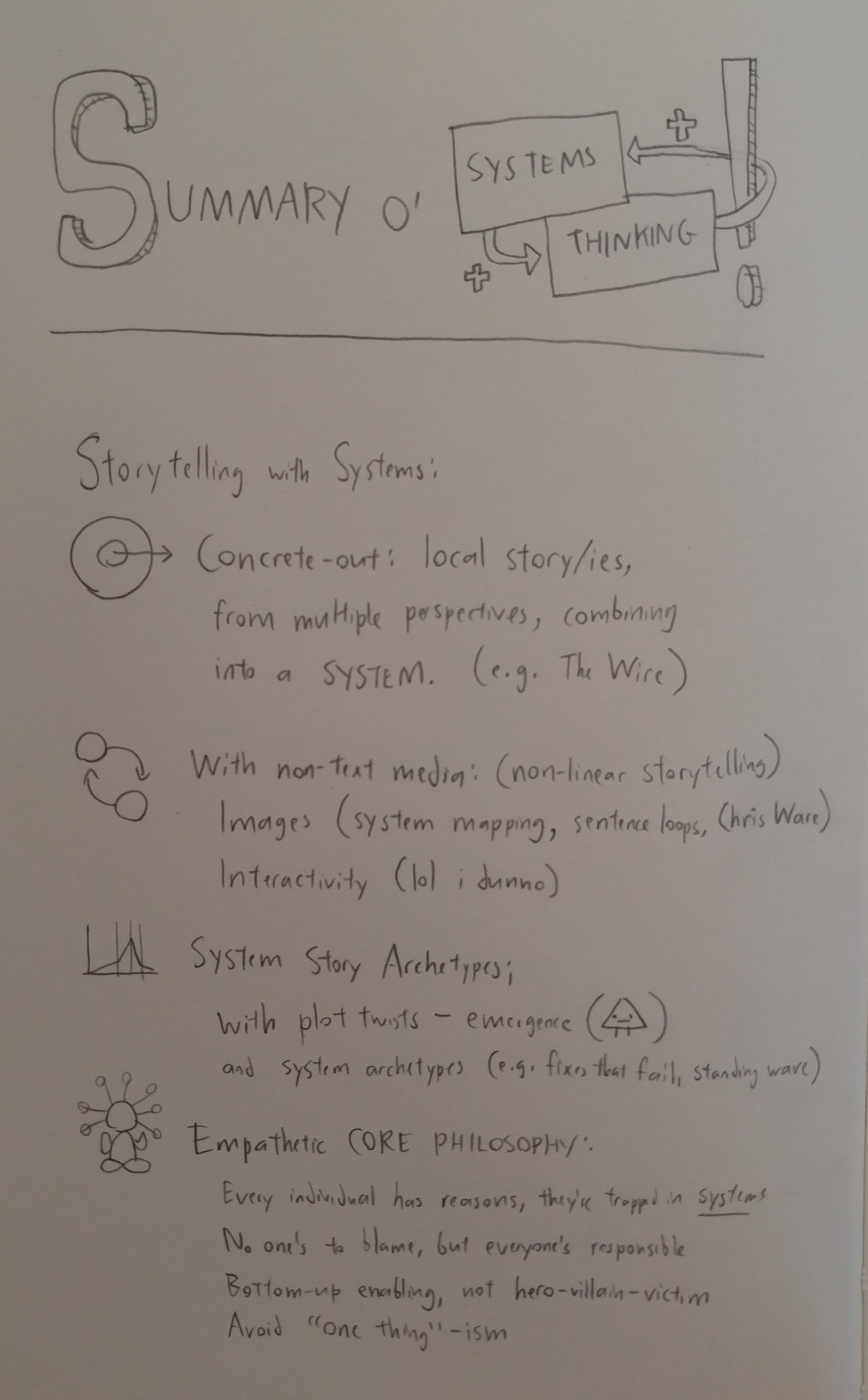 First page:
How to tell stories about systems, or stories with systems. 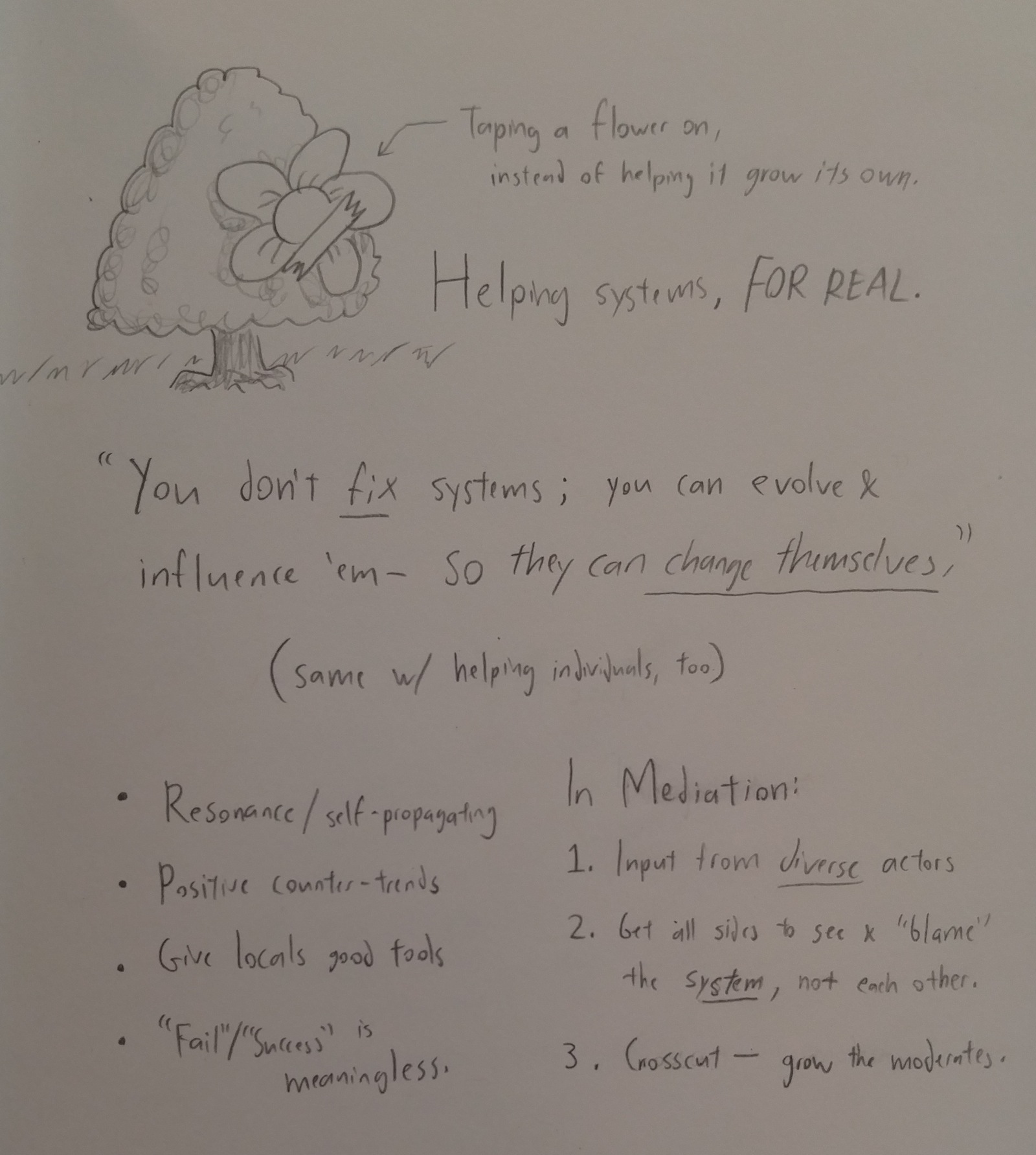 Second page:
How to use Systems Thinking to positively affect the world!

At the end of the workshop, we also had a group discussion on how to apply Systems Thinking to journalism, in practice and in teaching curriculum: 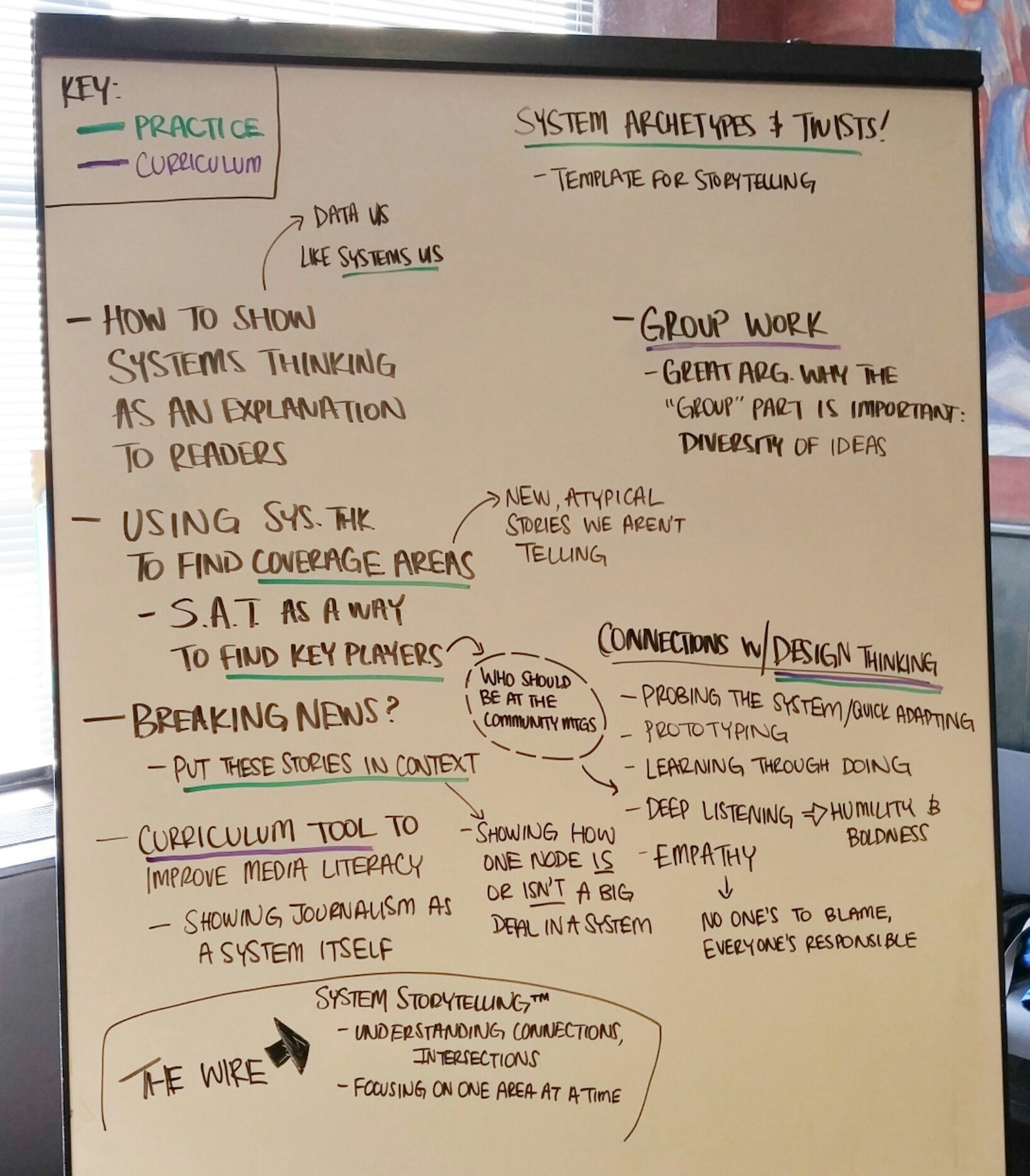 There you have it, the workshop summarized into three pages of notes! I did take more sketch-notes with my own personal reflections, but I worry maybe they’re too idiosyncratic, or don’t have enough context attached. But hey, I’ll post them here anyway: 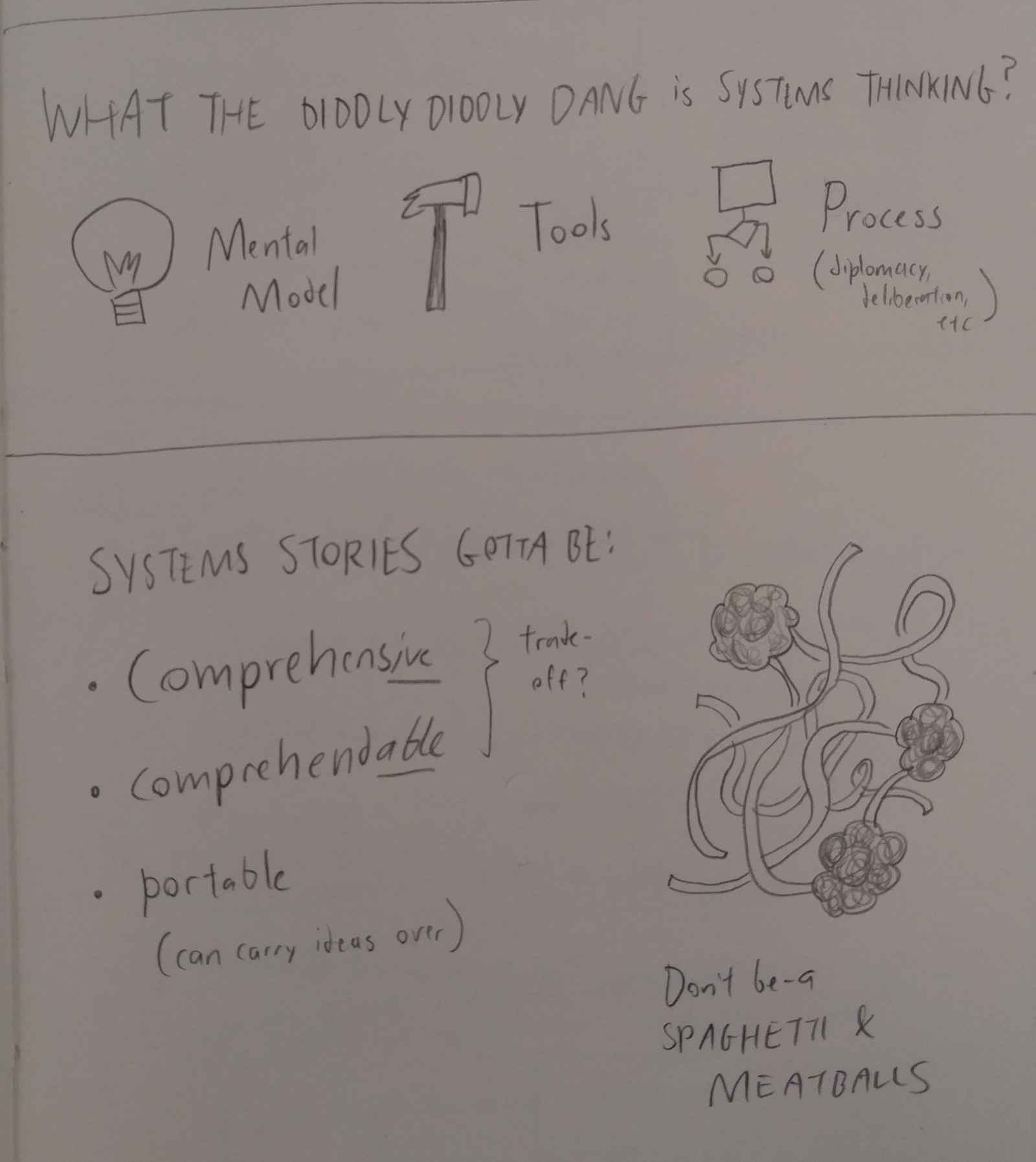 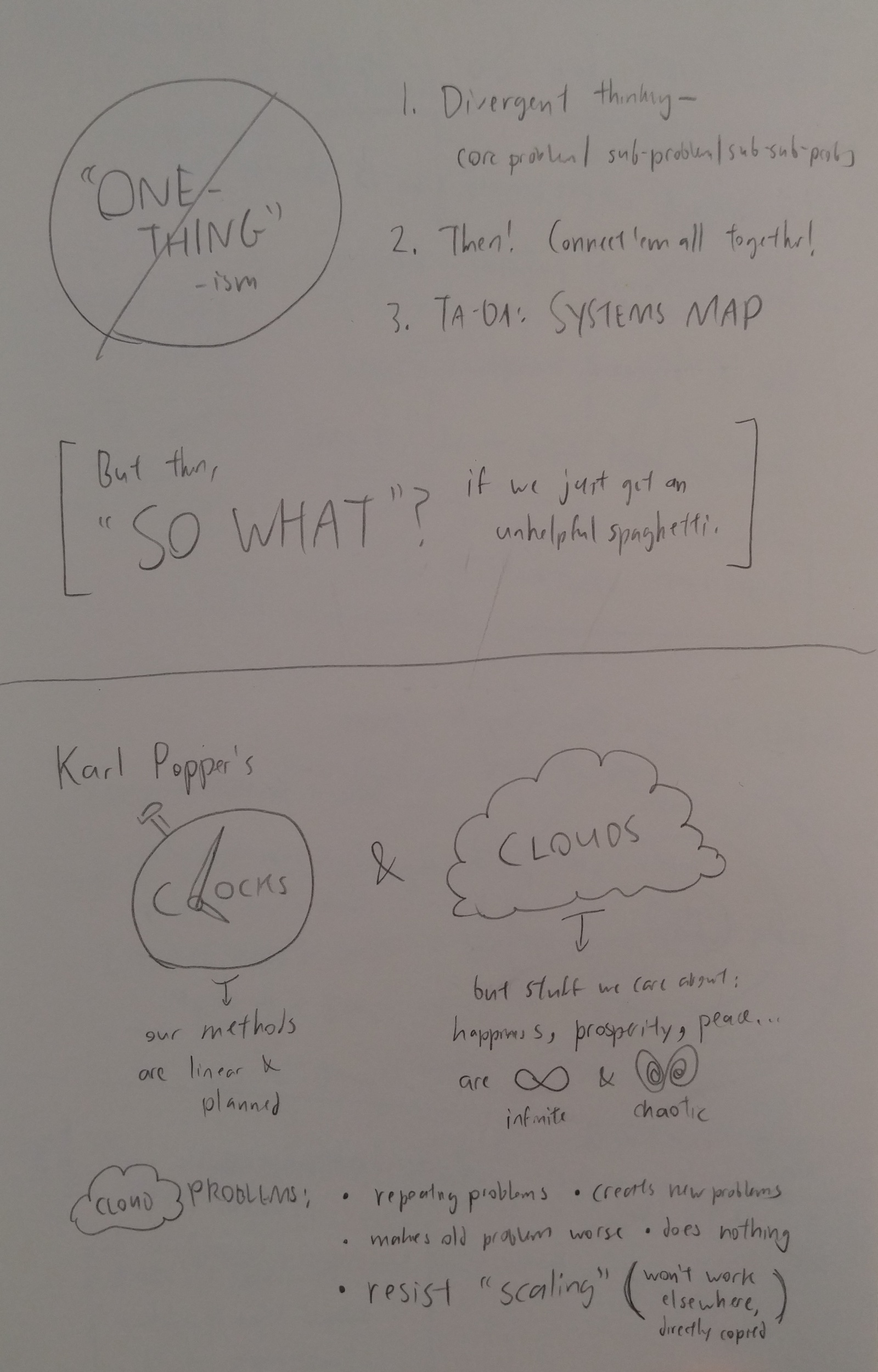 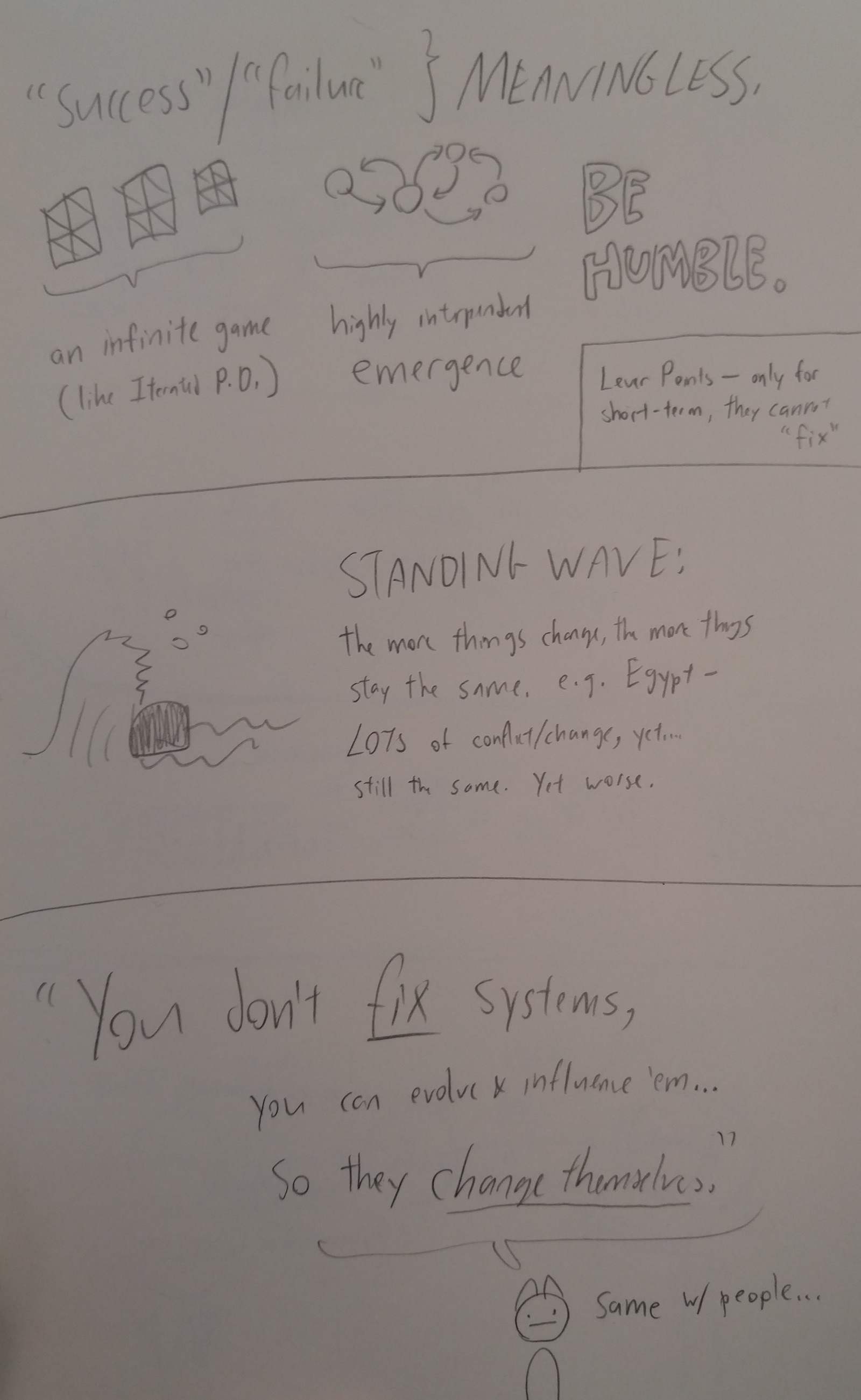 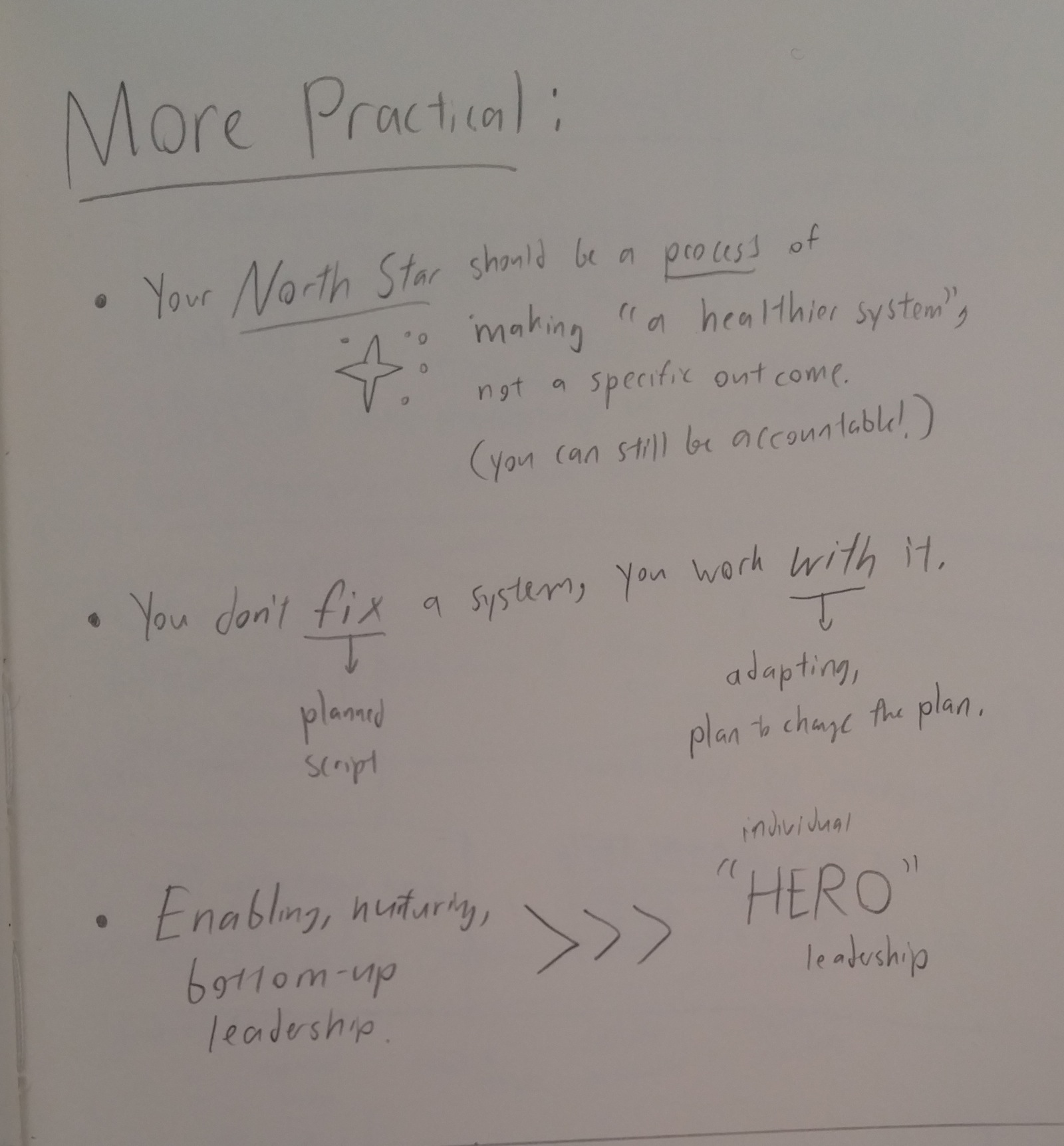 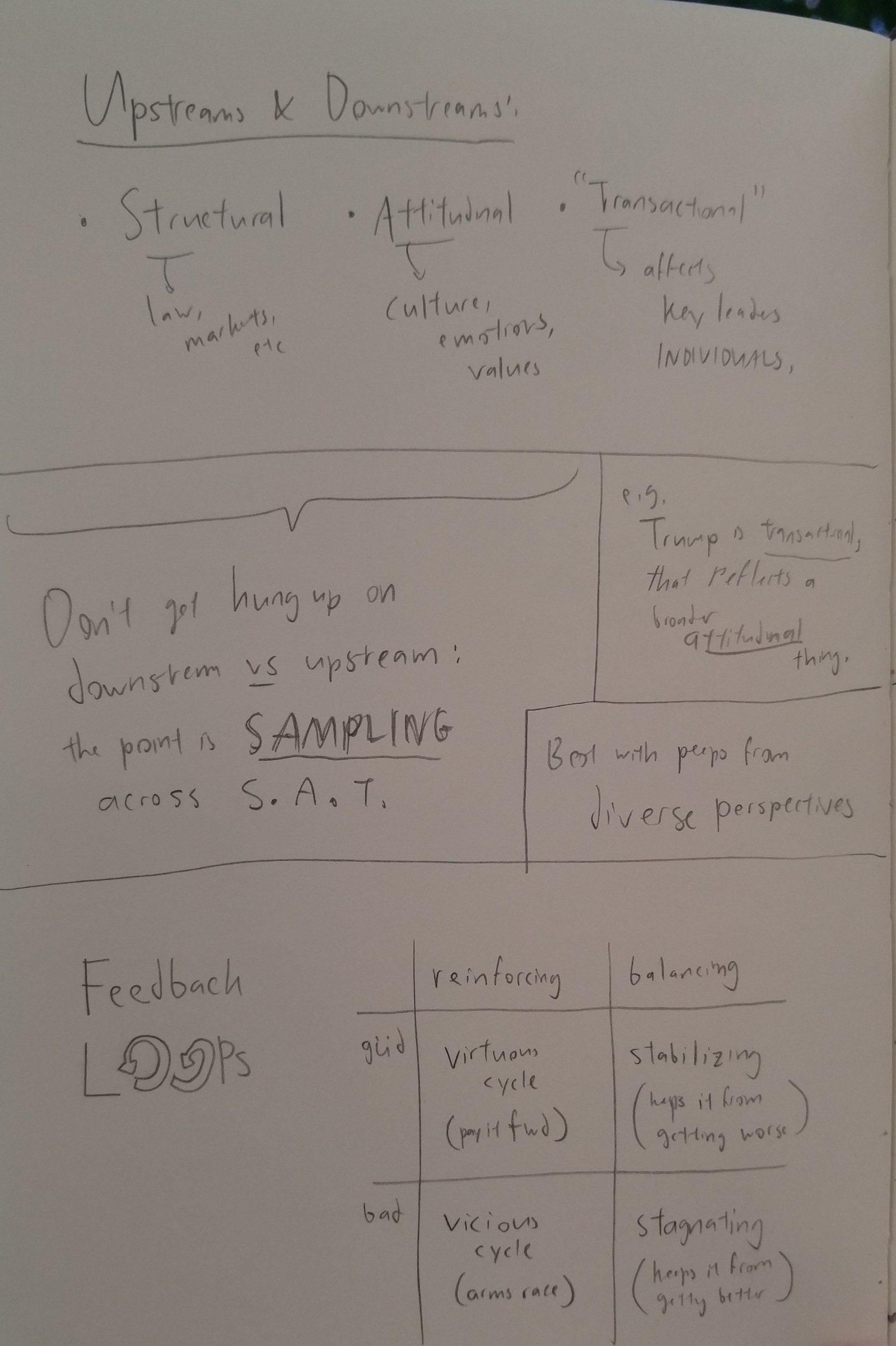 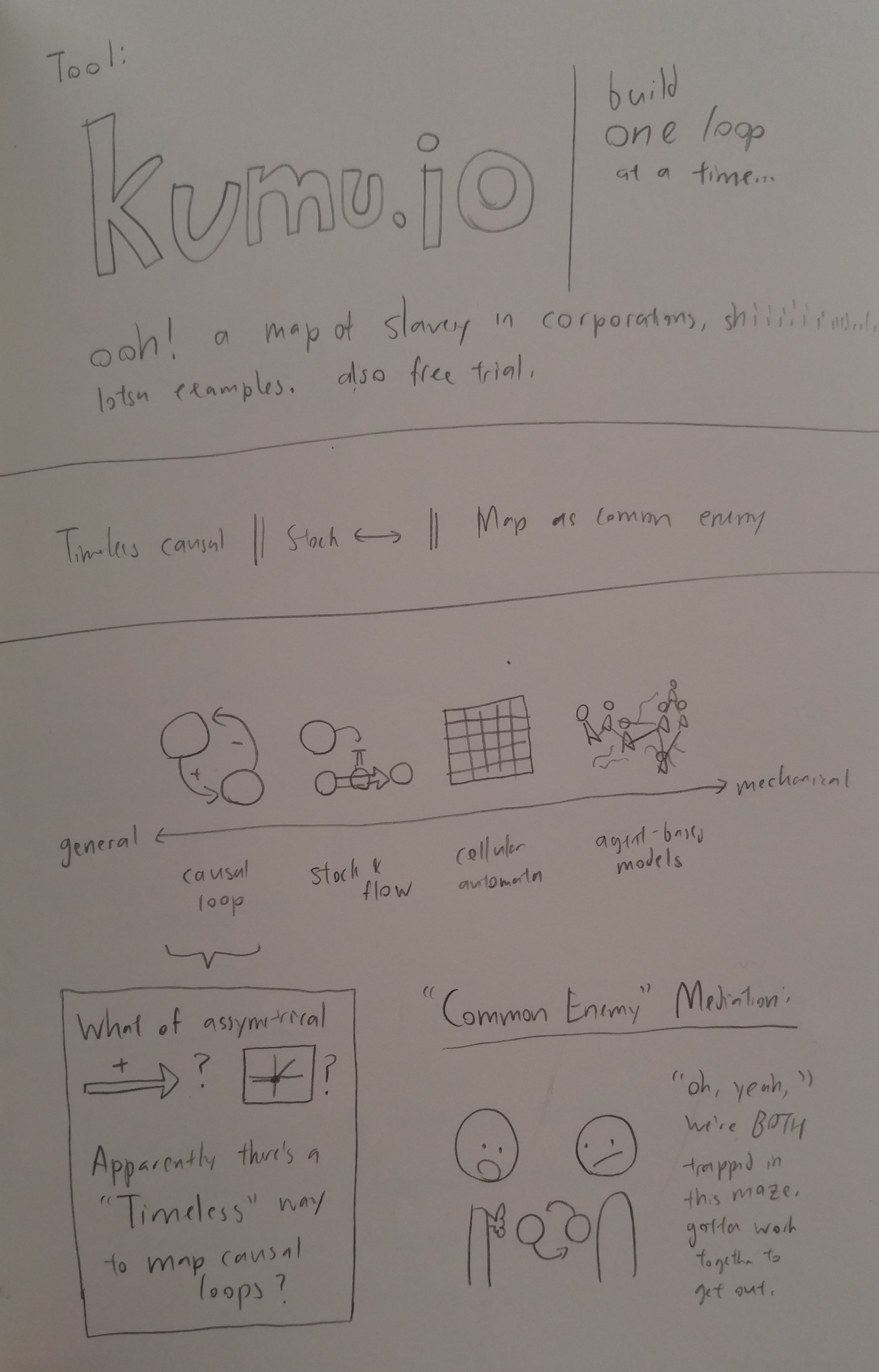 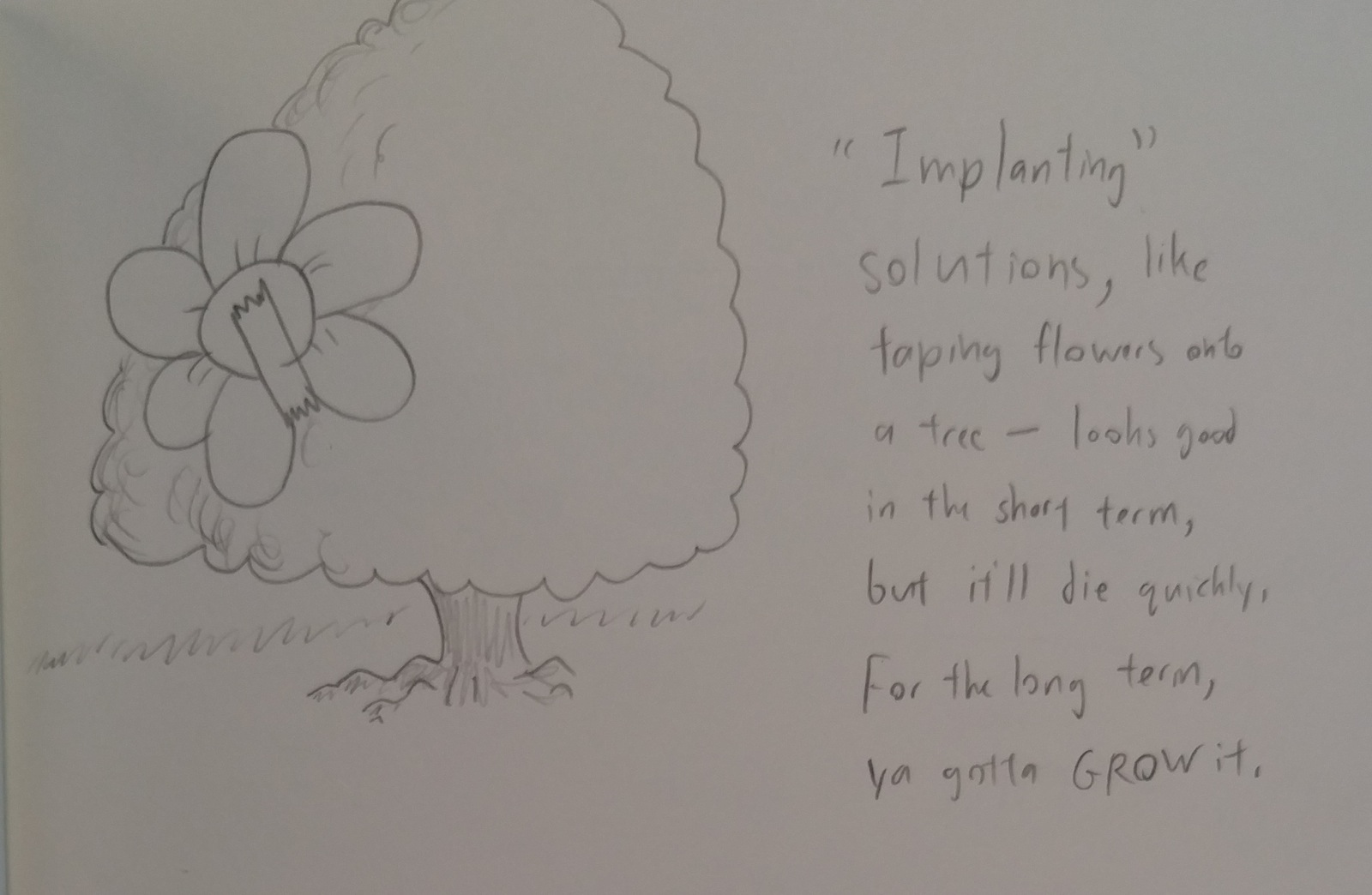 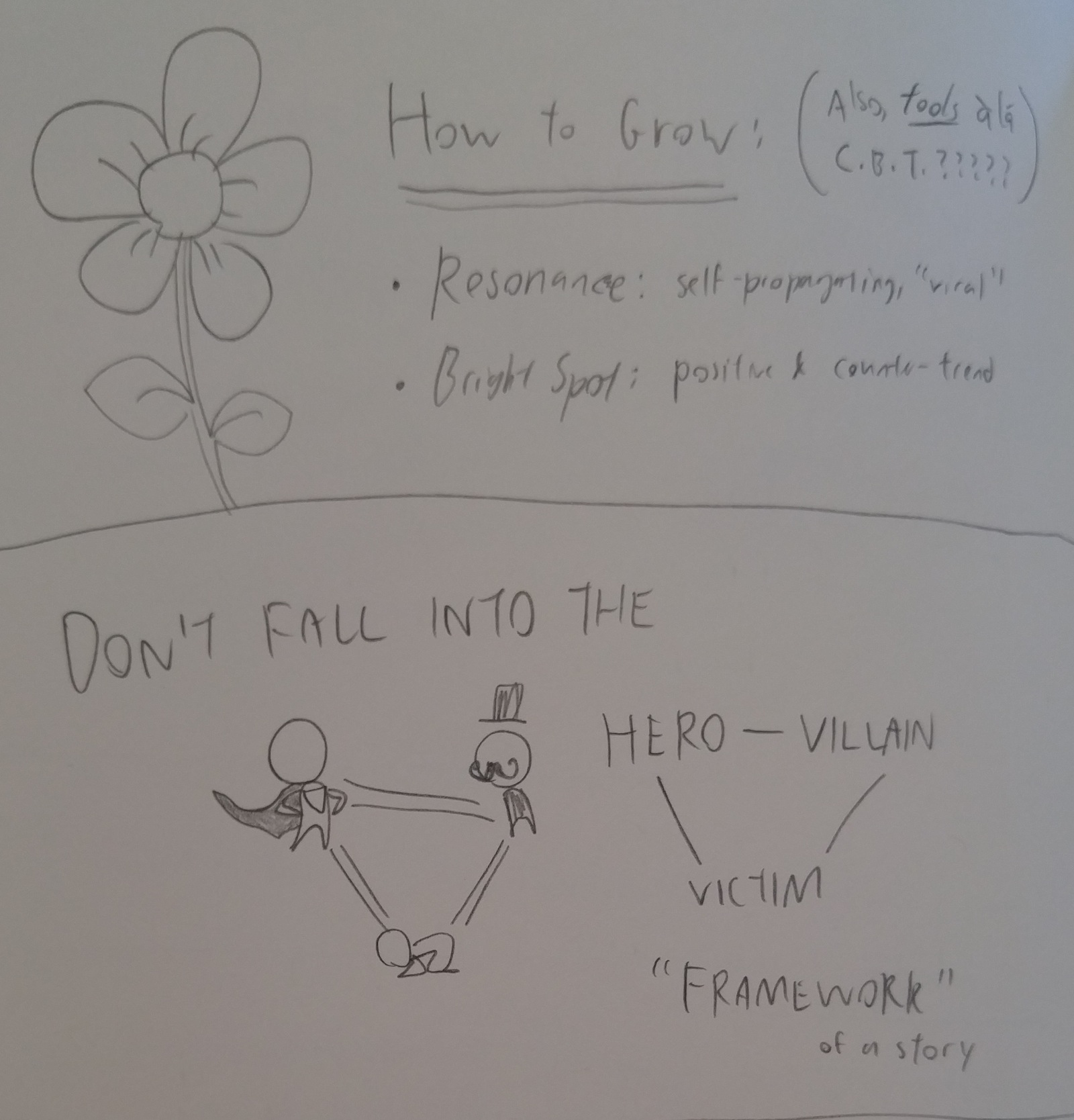 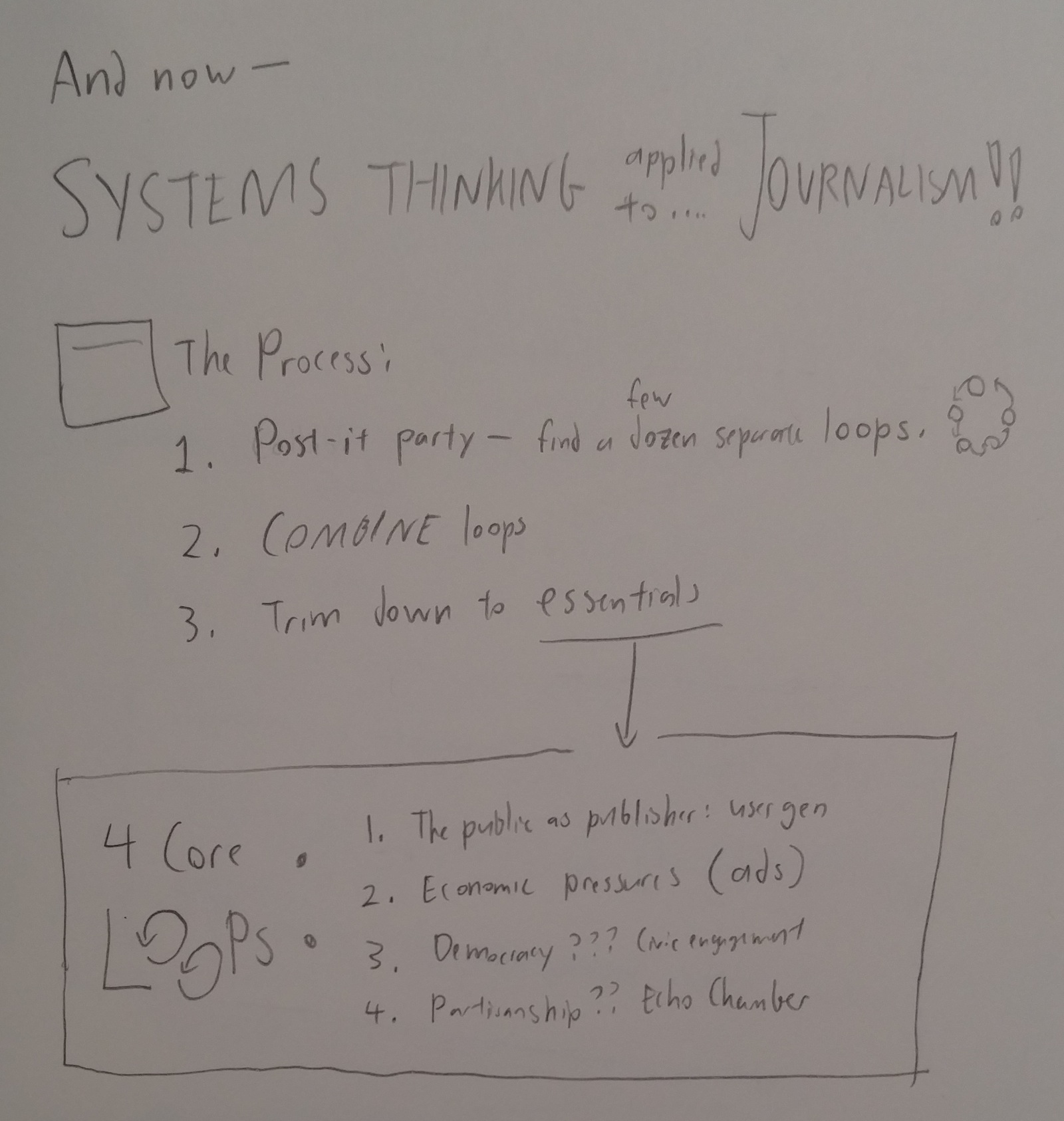 (as an Imgur album)

(sidenote: See this essay I wrote a while back, The Science of Social Change. On real empathy, and how we activists are doing things wrong.)

For a less messy and far better introduction to Systems Thinking, here’s the book that got me started down this path: Thinking In Systems, by Dona Meadows. I also made an interactive explainer of systems thinking… using emoji: Simulating The World (In Emoji 😘)

If you're an educator, journalist, or just a curious person, Systems Thinking can really help you a lot. Hope these messy notes could be a good introduction for you!