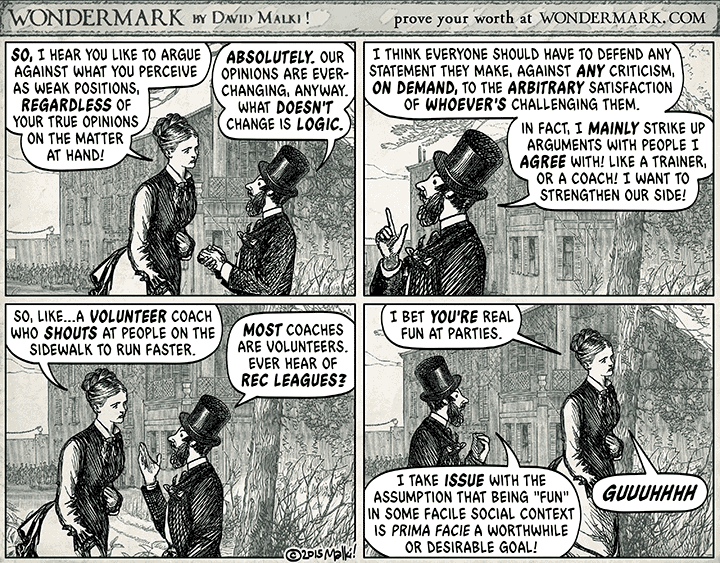 Lovely comic by David Malki!, used without permission, but I mean, I'm giving attribution and I'm not earning money from this blog, and also maybe my ass is covered by fair use since it is relevant to the discussion I'm having? Whatever, go check out David's webcomic Wondermark. There, now I'm advertising for him. It's win-win. And besides, his webcomic is made entirely using public domain images, which is awesome of him, so I'm gonna assume David's fine with me using OKAY WHATEVER MOVING THE FUCK ON

I just realized that, in the previous part, I didn't make the second-most-common critique of rhetoric: that we should rely on pure logic, unmixed with emotion.

First, I hope my dialogue with myself in the last part didn't make that impression, that I value logic entirely over emotion. In fact, I tried to splice things like “persuasion isn't about getting to the truth, whether that's a logical truth or human truth” to counter that impression.

Secondly, as an artist & activist, I know there's no hard line between emotion and intuition and morality and logic. We also know this from the science of psychology, which I went into more detail in a previous post. If you want to change hearts & minds, you need both emotion and logic. Emotion isn't just the sugar-coating for the pill of logic, emotion is more like making the medicine a swallowable pill-shape in the first place.

But most importantly, the fact I accidentally left out the super important question of "shouldn't we be persuaded by pure reason and not emotion", because it's already so obvious to me it's false, is a strong example of the limitations of my dialogue with myself.

That's why this is a confessional intermission.

I know talking with myself is kind of bullshit, so it's good to keep the limitations in mind. (The upside of debating with yourself is you know you're at a matched skill level with your opponent)

The weirdest thing, though, is that it's working? I usually learn something new whenever I write a long blog post, mostly because it forces me to synthesize my messy thoughts and do extra research. But I'm learning so much now, just by questioning myself.

Confession #1: I had expectations.

To show you what I've learnt, I need to confess something: I went into the dialogue with specific expectations. I didn't necessarily know exactly how it'll turn out, but I fully expected Rhetoric to end up a completely broken, untenable position, then that way I could hype up Dialogue/Dialectic, and why games are the only medium that can offer a true dialogue, blah blah blah blah

But that didn't happen - instead, I ended up learning by arguing with myself, that Rhetoric is an important part of the ecosystem of knowledge? But not the only part. You can't improve a system by focusing on only one thing.

So, that's a new piece of knowledge for me, that I accidentally generated.

Confession #2: I still have expectations.

At the end of Part 1, I needed a catchy way to summarize the current conflict I'm feeling -- that Explorable Explanations are a more powerful way for an author to make their argument, but at the same time, isn't the real power of interaction in the player being able to talk back?

And it's super ironic, because in the second sentence of Bret Victor's original essay, Explorable Explanations, he says:

“An active reader asks questions, considers alternatives, questions assumptions, and even questions the trustworthiness of the author.”

And I'd somehow forgotten about that, because I was too busy thinking about Ian Bogost's procedural rhetoric, which is still amazing, by the way.

For whatever reason, though, I decided to go through the whole long tedious process of writing a multi-part post, debating with myself. And I'm glad I did, because I learnt a lot, and subverted my own expectations!

That said, I still have the expectation - or suspicion - that I'm going to arrive at the answer of "just do both", just make art that allows the author and audience to express themselves. But I can already see some objections with that answer, so I'm looking forward to colliding it at high velocity with various questions.

While doing extra research for this, I learnt that "thesis-antithesis-synthesis" is usually associated with Hegel, (even though he never used the term himself) and that Marx was super into Dialectics. For the record, I am not now or at any time have ever been a member of the Communist Party, thank you Senator McCarthy.

I mean, I'm debating with myself. "-bating" is the last two syllables.

But seriously, when juxtaposed to my earlier essays about art and activism, social justice and social change, isn't this meta-meta-meta-discussion kind of... irrelevant? I certainly felt so. That's why I almost didn't do this series at all, after thinking of the "just do both" answer.

But now that I think about it more, what I'm dealing with here -- or fumbling and bumbling around with here -- are the very fundamentals of how we reach and teach knowledge. And if that isn't the very heart of art and activism, well, gee golly dang it.

No no, uh, wait, more like intellectual calisthenics. Calisthenics are a form of exercise that don't require equipment. It has limitations, just like me-debating-with-myself had limitations, but still wonderfully useful. I'm not sure what intellectual exercise-equipment would look like, but maybe that's what I'll discover in the upcoming parts.

Back to our regularly scheduled intellectual master-debating!

This is part of a multi-part series, because I'm making it up as I go along, debating with myself, and somehow learning things from it?