The Story In A Story 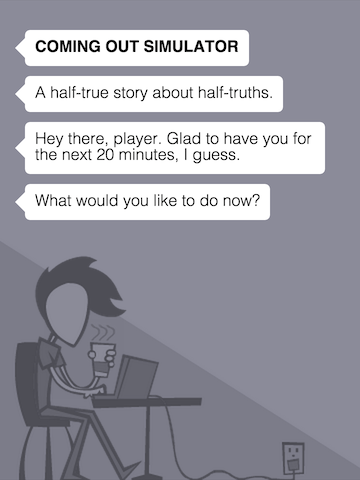 The story-within-a-story. It's a technique I've noticed quite a lot, and unintentionally used in making my own interactive story, Coming Out Simulator. There's the surface-level "cool" factor, (programmers love self-recursion!) but it's only now that I realize the function that this technique serves. Coz without it, it's just a confusing gimmick.

Before I say what that function is, I gotta talk about Wes Anderson, Bertrand Russell, and bi boys.

The Grand Budapest Hotel was one of my favorite recent films, but I couldn't really put my finger on why. I could only tell you about the surface-level stuff I noticed, like the pastel colors and punchlines.

For me, this video essay made me realize why The Grand Budapest Hotel had a tale-within-a-tale-within-tale: to show a story being passed down through time... like an inheritance.

It's one of those things, that's so obvious in hindsight you can't help but slap your forehead and say, “dayuuuuuuuuuuuuuuumn”.

LOGICOMIX was a wonderful graphic novel I read recently, and wrote about last week. (my article got fairly popular, apparently.) This is another tale-within-a-tale-within-tale, where the authors show themselves trying to retell Bertrand Russell's lecture where he tries to retell his life story.

Here, instead of a story being passed down to future generations, it's more of future generations trying to create stories from the past. At the very "top" layer of the story, the multiple authors are shown arguing over how to interpret Russell's story. (was it a tragedy, or a comedy?)

This time, the meta-narrative's function was to show how we learn from the past - both others' and ours.

Coming Out Simulator was the meta-narrative I made. (which only has two layers) I kinda stumbled upon this technique by accident. I just needed a menu + tutorial + background exposition, and the framing device of "present Nicky" talking about "past Nicky" seemed to be a good enough solution.

But there were two beautiful consequences to this simple choice: 1) It strongly emphasized the unreliable narrator aspect, how I'm trying to rewrite my own past. 2) After the "main story", it flashes forward to present-day me, and shows how my past affected my present - and how It Gets Better.

It showed how the past changed me, and how I was trying to change the past.

You might have noticed that this blog post was not just a story-in-a-story, but three parallel stories inside this larger story, the story of how I found out the function of this technique.

The function? To show how the past, present, and future interact.

So the next time you (yes, you, future-me-reading-this-blog-post) feel like throwing in a meta-narrative, make sure it's not just for the "cool" factor. Form without function is a gimmick, but if you get that function in there, you can make a story that really resonates through time.

Epilogue: I didn't talk about the case when there's a story-within-a-story, but the stories are not part of the same timeline, like Hamlet making a play-within-a-play in order to prove Claudius's guilt. (And heck, what about novels that make themselves an object in their own stories, like House of Leaves or Breakfast of Champions?) So, a more generalized version of the "function" I described would be:

To show how different stories interact with each other.

Stories are one of the main ways we communicate, and miscommunicate -- whether that's tales about our past, plans for our future, or fables and legends of other people we retell.