This a picture of the art installation, The Longest Distance Between Two Points. The installation uses those airport belt-thingies to create a long winding path between two doors, a journey of the highest inefficiency, a commentary on bureaucracy, probably. I learnt about this art installation while thumbing through some book somewhere.

Anyway, point is, that installation sums up what my process behind making Neurotic Neurons felt like.

I first got the idea to make an interactive something about neurons back in December 2014, while working on Parable of the Polygons. I'd learnt about Hebb's Rule through some book on AI, and thought it'd be a great to turn that into a playable system. Here's how the idea evolved -- although "evolved" wrongly implies steady improvement -- over time:

Mar 2015: Cutting it down to just classical & operant conditioning. Planned on making it an interactive blog post like Parable of the Polygons, and have players recreate the Pavlov's Dog and Skinner Box experiments.

Jun 2015: I finally learn about Anti-Hebbian learning, jeez. Without it, the model was really limited. I title the project "I'd Like To Be A Machine", and it would be a long interactive article, interleaved with a personal story of me overcoming anxiety. I drop the experiment-recreation parts, since they were boring in practice.

Aug 2015: I'd Like To Be A Machine was starting to get really bloated. At this point, it was a five-act blog post. I finished three out of five acts before I quit and reset everything. This was my final prototype.

Sep 2015: After many lackluster playtests, I finally admit to myself that I'd Like To Be A Machine wasn't working, and quit it. Besides, I'd been aching to try out this new idea for an interactive video, so I thought I'd try that. Made a prototype in one week, peeps really liked it. Fleshed it out in two weeks, and bam, Neurotic Neurons was complete.

Somewhere in my sketchbook-diary, I have, scrawled over two pages, a short note to self written in gigantic letters...

...and a short footnote in the margins pondering what the plural of magnum opus was. (it's “magna opera”) I made this crude note to self, because it was then that I finally realized the vicious cycle I tend to trap myself in:

I dream big.
→ I get attached to this big idea.
→ I spend lots of time implementing the idea.
→ I feel guilty that it's taken so long.
→ To make up for it, I dream even bigger.

I'd fallen into this trap several times before, with my crowdfunded indie game Nothing To Hide, my former "startup" Craftyy, and wanting to turn my :The Game: series into a media franchise with t-shirts and a sister webcomic(?!)

All because I thought it was good to “dream big”.

As a culture, we really tend to push that idea of “dreaming big”. But, uh, have you had a dream recently? Last night I dreamt my tongue turned into a tree. Two weeks ago I dreamt I pulled all my fingers off, and no, I don't know how I pulled my last finger off if I had no other fingers left???

The point is, dreams ain't worth shit. Nighttime dreams live in a warped reality, while daytime dreams spring from one's limited knowledge of reality. “Dreaming Big” is the act of making up answers for your life, based off assumptions you haven't even tested yet.

As a culture, we celebrate big answers over big questions.

And I think that's unhealthy. So from now on, fuck magna opera, and thinking some big project can ever be The Answer to figuring out my life. From now on, I'll try to ask interesting questions through my prototypes and sketches -- after all, isn't that what it means to be experimental, to ask questions, and know I don't know the answer?

Maybe. Anyway, “fuck magna opera” isn't a very actionable statement, so here's some guidelines I'm going to try to stick to for the next few months:

For example, the biggest question I was trying to answer with my first prototype for Neurotic Neurons, was “Does the interactive narrator work?” Would the voiceover distract from the play, or vice versa? Would people just not like it for other reasons?

I wasn't asking if people would like interacting with the neurons, or how to best teach Hebb & Anti-Hebb. Because, the silver lining from nine months of thrashing: I already knew the answers to those.

And you know what, those nine months weren't a total waste. Other than the feedback I'd gained, I also coded a lot of the engine, and learnt a lot of auxiliary stuff about social-cognitive theory, media theory, and therapy, which had a profound effect on my interests and personal life.

But, y'know, if I could gain epiphanies more efficiently, and not travel the longest distance between two points, that'd be nice.

A page from my sketchbook, my first attempt at figuring out the storyboard for Neurons: 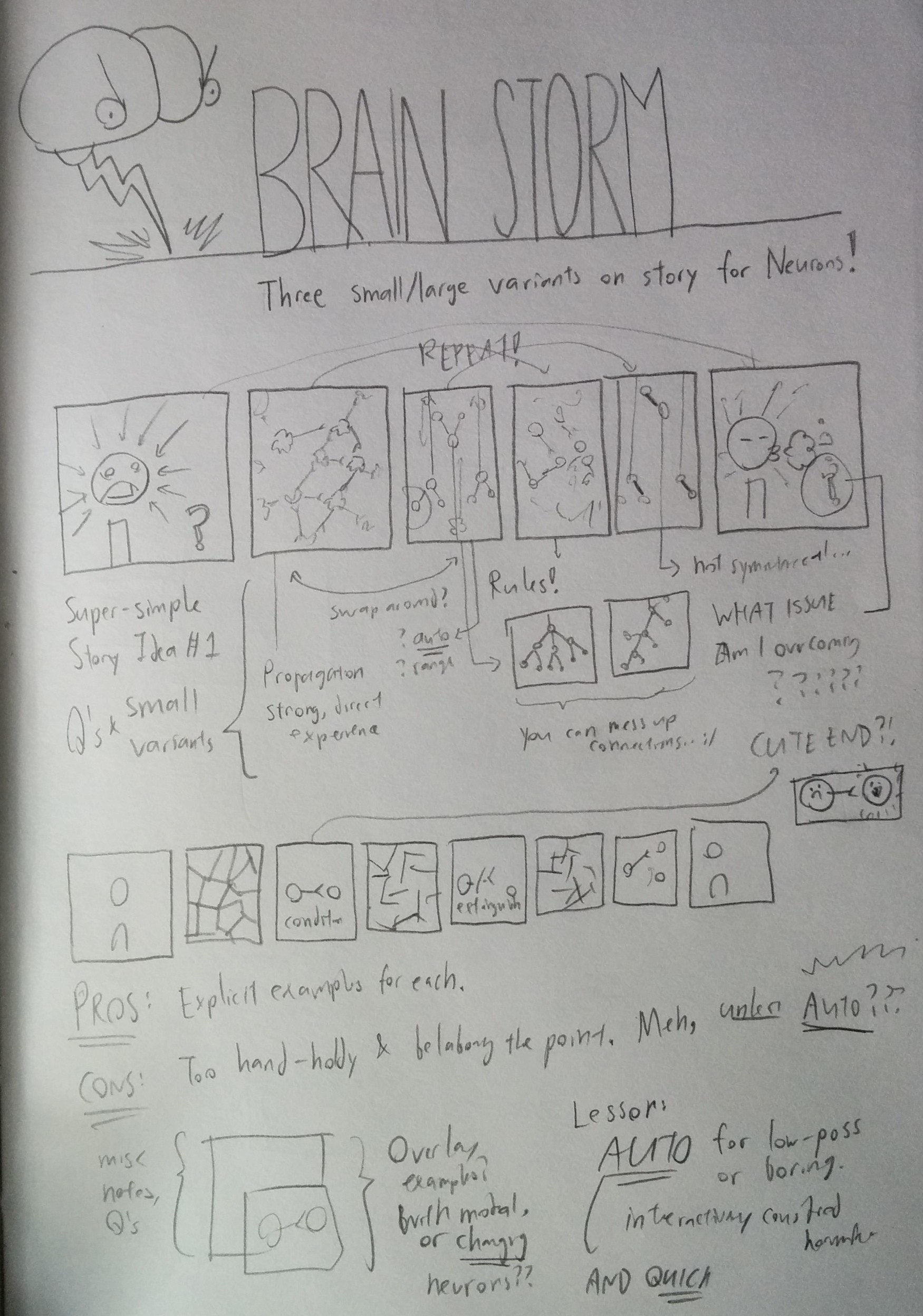 An early digital sketch of the intro scene: (The art was made in Adobe Flash, but don’t worry, everything was exported to PNG, so I could use the art with pure HTML5 & canvas) 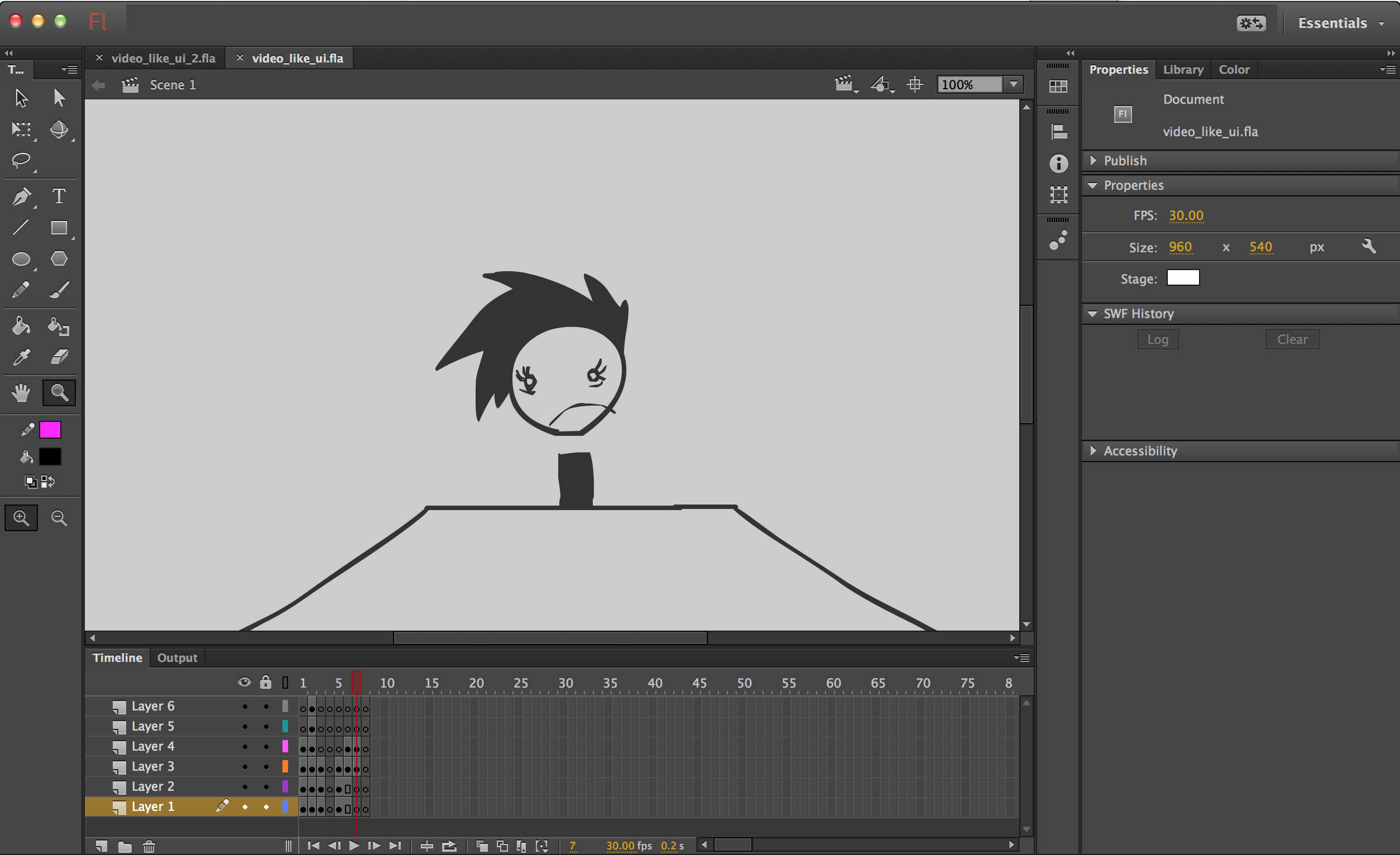 Where I did my sound recording — in my bedroom closet, with an old, beaten-up microphone, surrounded by pillows to prevent echo: 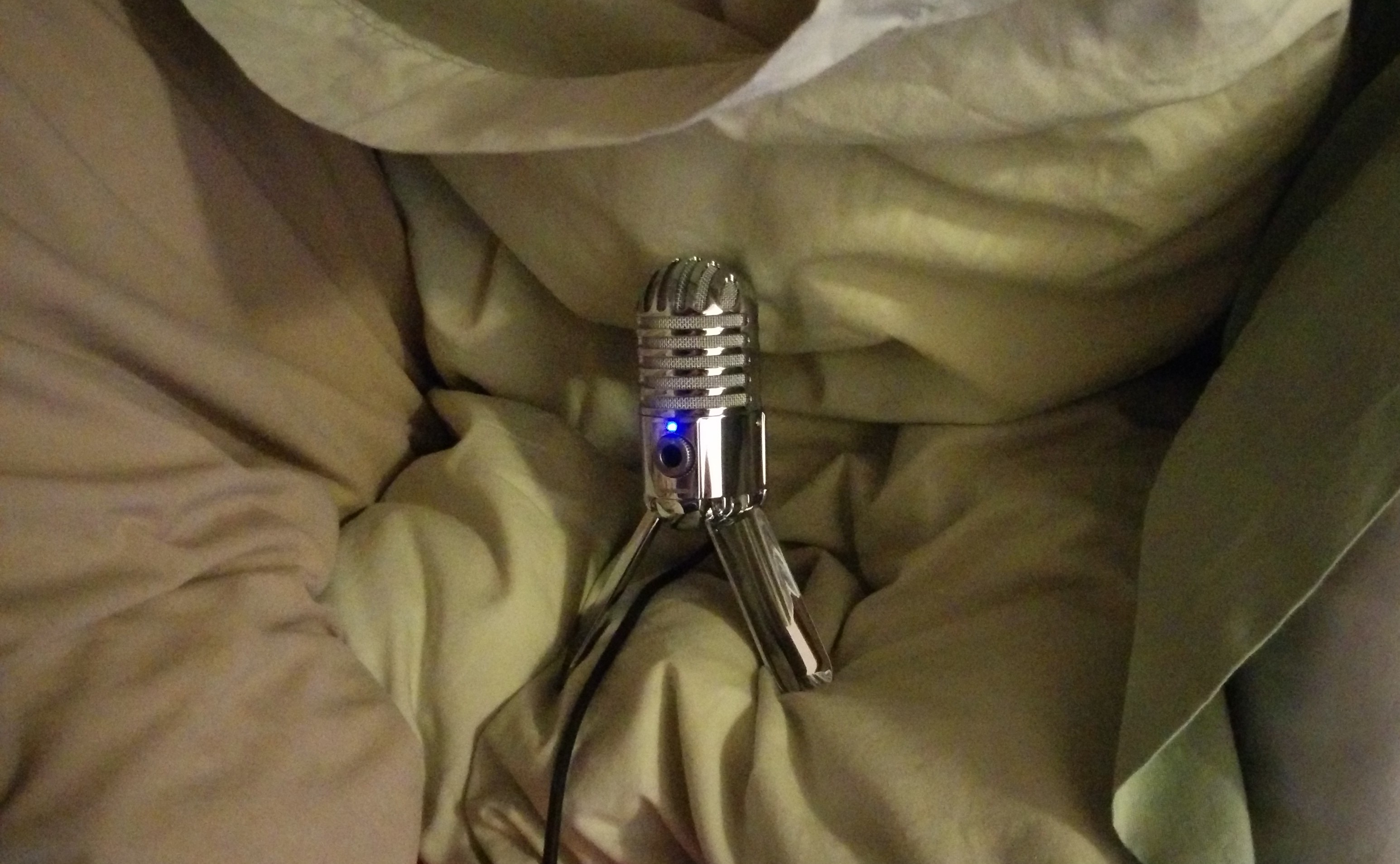 That’s not a black circle on the microphone, that’s a gaping hole. It's old and dying. As all of us will be, some day~