For the past few years, I made games that teach ideas – but, I wondered, can I make games that teach skills? Apparently, I don't have the skill of making my own decisions, so last week I sent out a poll asking you to help me decide what to make next!

The poll had four project ideas: Web Programming, Science Writing, Statistics (without the scary formulas), and Learning how to Learn. For each one, I asked: on a scale of 1 to 5, how much you liked that project idea in particular, and separately, how much you want to learn that skill regardless of my project. Also, I gave a duplicate poll to my Twitter fans so I could log their responses separately from my Patreon supporters, because my Twitter fans, as much as I love 'em, can sometimes be a bit, uh...

Anyway, 700+ survey responses later, here are the results! (shown: average ratings with 95% confidence intervals. top 4 rows are ratings on each project, bottom 4 rows are how much people want to learn that skill regardless of project) 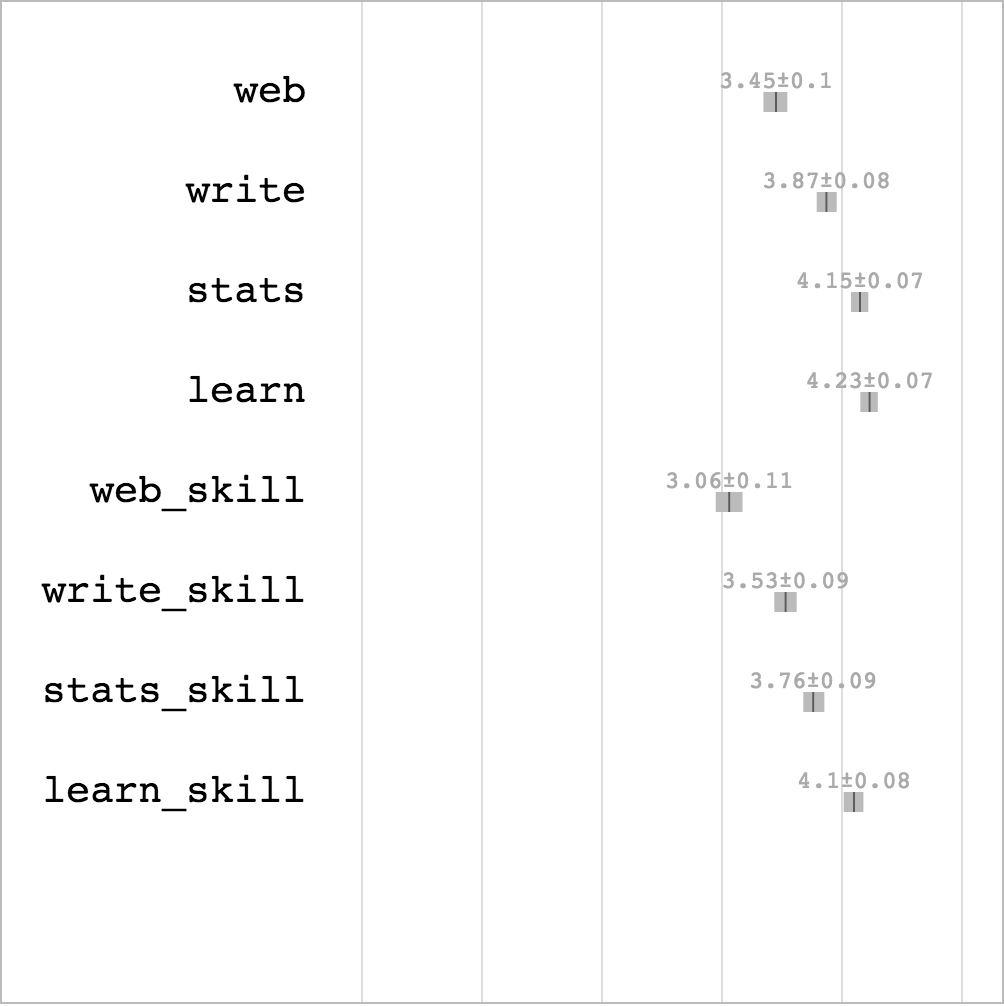 This'll actually be tricky to teach. Programming & statistics have many well-established rules, writing's got a few time-tested techniques, but learning? The science of learning is a baby, and the practice of learning has been muddled by schools' standardization & specialization. If I want to teach this well, I have to learn a lot more about how we learn.

Also – splitting the results by Patreon and Twitter fans, respectively: 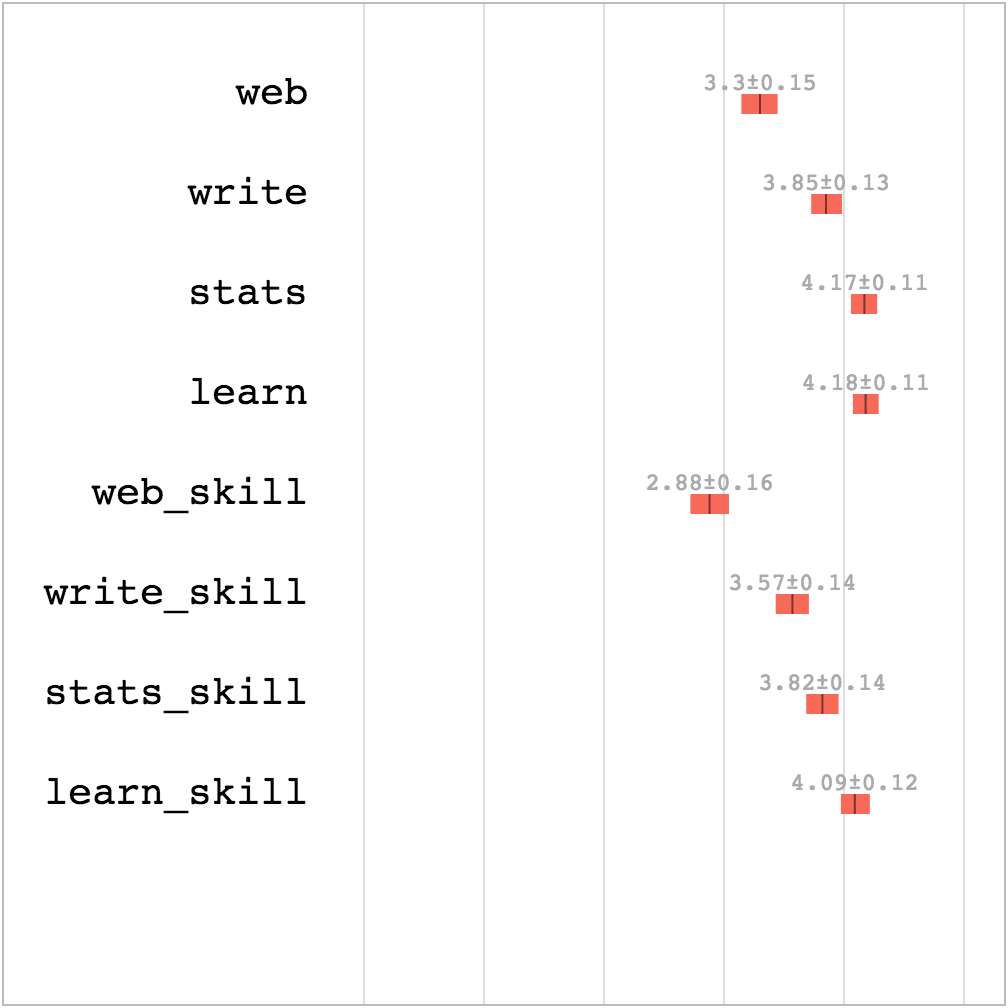 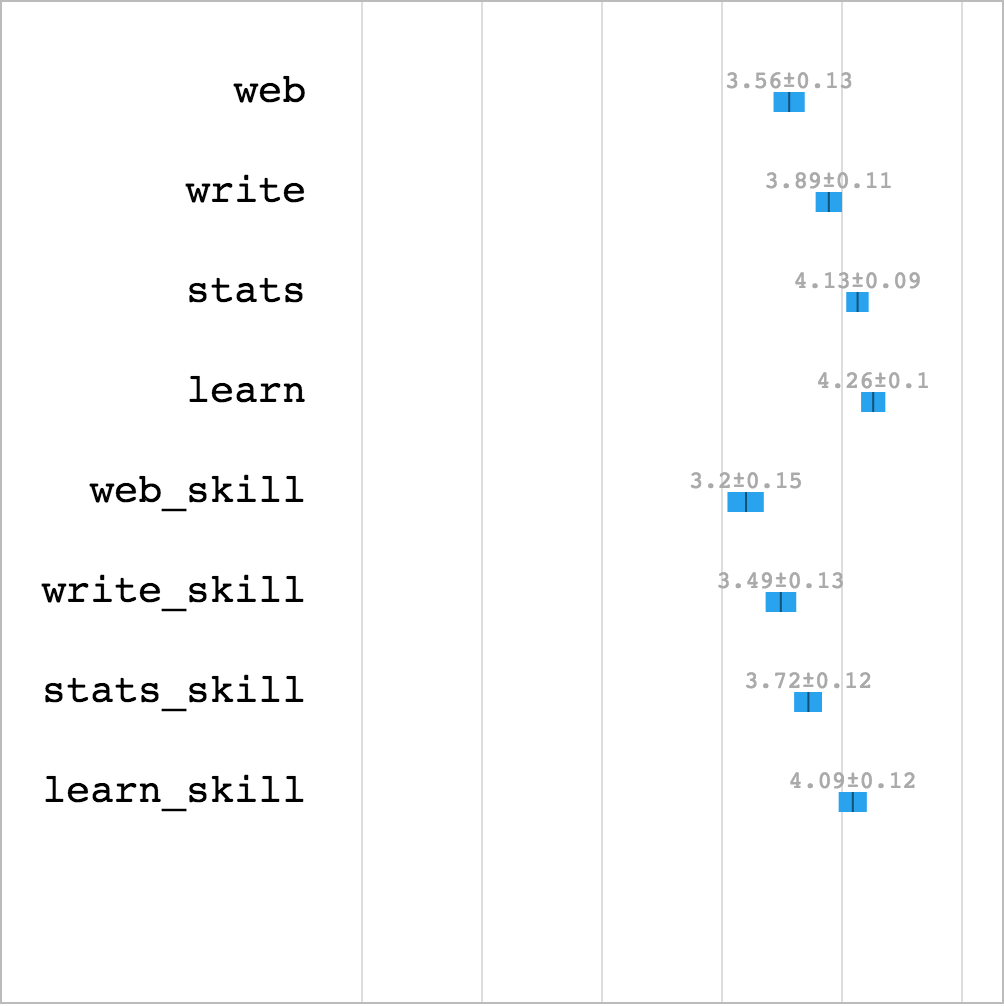 (you can get the anonymized raw data & source code here. yes, i analyzed the stats using javascript, so sue me)

Looking at the data, two surprises jumped out:

Finally, the poll had an optional open-ended question: what skill NOT listed here do you want to learn? I didn't do any fancy word-frequency analysis here, I just read through all the responses and counted what people said. “Hook up with girls” aside, the skills people wanted to learn are fascinating! Here were the top yearned-for skills:

These are dang good suggestions! I really hope to make explorables about these one day – or better yet, someone else will beat me to it, so the rest of you don't have to wait.

It was only while making Crowds that I learnt about complex contagion theory, which ended up being a core part of the final explorable. It was only while making Trust that I learnt about game theory strategies like Detective and Simpleton, who ended up in the explorable's main cast of characters. And – as I hinted at earlier – it's only going to be while I make this project about learning that I'm going to learn what it really means to learn.

I've had boring teachers. I've had inspiring teachers. One of the core differences is that the bad teachers monologue at you like they know it all, but the good teachers instill curiosity in their students because they themselves stay curious. They're always trying new things, always genuinely interested in kids' ideas, always "still learning". The best teachers know they're students, too.