The first pop-up books were not for children.
They were meant for scholarly and academic audiences. 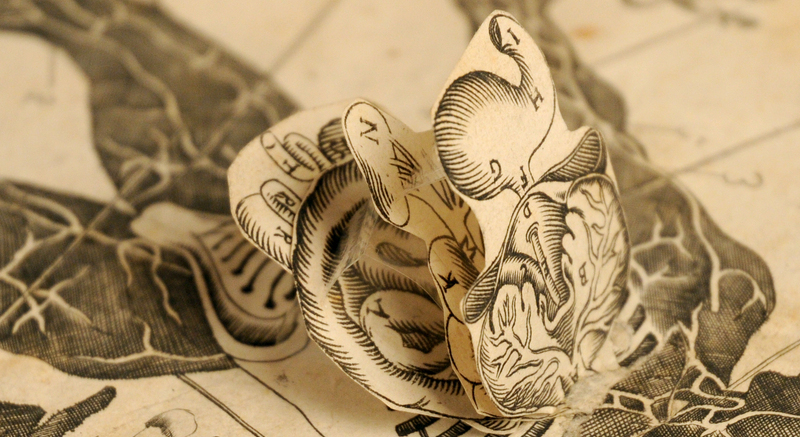 The first question is... why would they do that?

The first known book with paper mechanisms was created by Matthew Paris, a 13th century monk. His work, the Chronica Majorca, had a spinnable paper wheel inside of it which could calculate the dates of Christian holidays.

Other professions caught on.

Mathematicians would use pop-up books to embed 3D models into their texts. Medical texts used paper flaps to show the various layers of human anatomy. Astronomers would use paper wheels to portray the orbits of heavenly bodies.

The real question is... why aren't we doing that?

Along the way, pop-up books somehow got relegated to the field of "just for children". (Lots of mediums with great potential get stuck here - animation, comic books, video games, etc.)

We probably won't want actual pop-up textbooks, as cool as that sounds, but the principle of the early pop-up books is still valid: integrating interactivity. And with digital text, it's almost trivial to include interactive portions into a work to help the reader learn the material more fully.

That's what a small group of designers and I call Explorable Explanations - how to use interactivity to help teach ideas. Not gamification, not glorified flash cards, not clicking through slideshows... rather, true learning by doing.

I hear and I forget. I see and I remember. I do and I understand.

That's a Confucius quote that I heard a long time ago, and ironically, had to look up again for this blog post. The point is, interacting is understanding.

That's what monks in the 13th century knew.
That's what our Explorable Explanations movement will bring back.