Note: the following was originally posted on my Patreon, in two parts.

Hi all! Sorry I didn't update in a while – I forgot to mention I was going on "vacation". I say "vacation" because I ended up working on stuff anyway... including co-organizing an in-person Explorables Jam kickoff event!

On July 28-29, Chris Walker (creator of SineRider) and I hosted a small Explorables hackathon. There was collaboration, lightning talks, mini-presentations, and best of all: food that was NOT pizza. 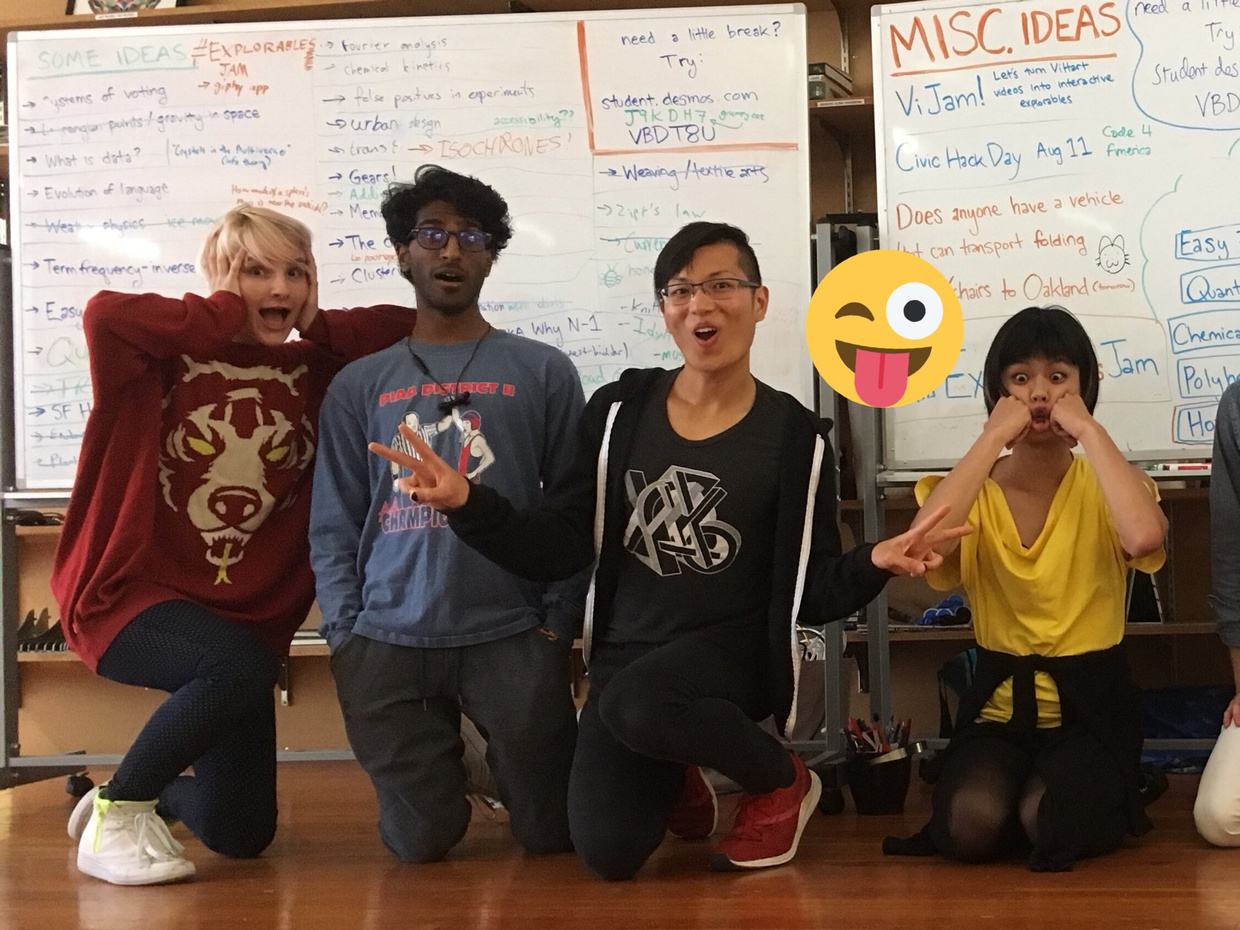 My favorite part was at the beginning: totally unplanned, on their own, the jammers took a couple whiteboards, and used them to brainstorm dozens of ideas! Then, using sliced post-it notes, they voted on what ideas they liked/could help with. These would help them form their teams. Spontaneous self-organization! 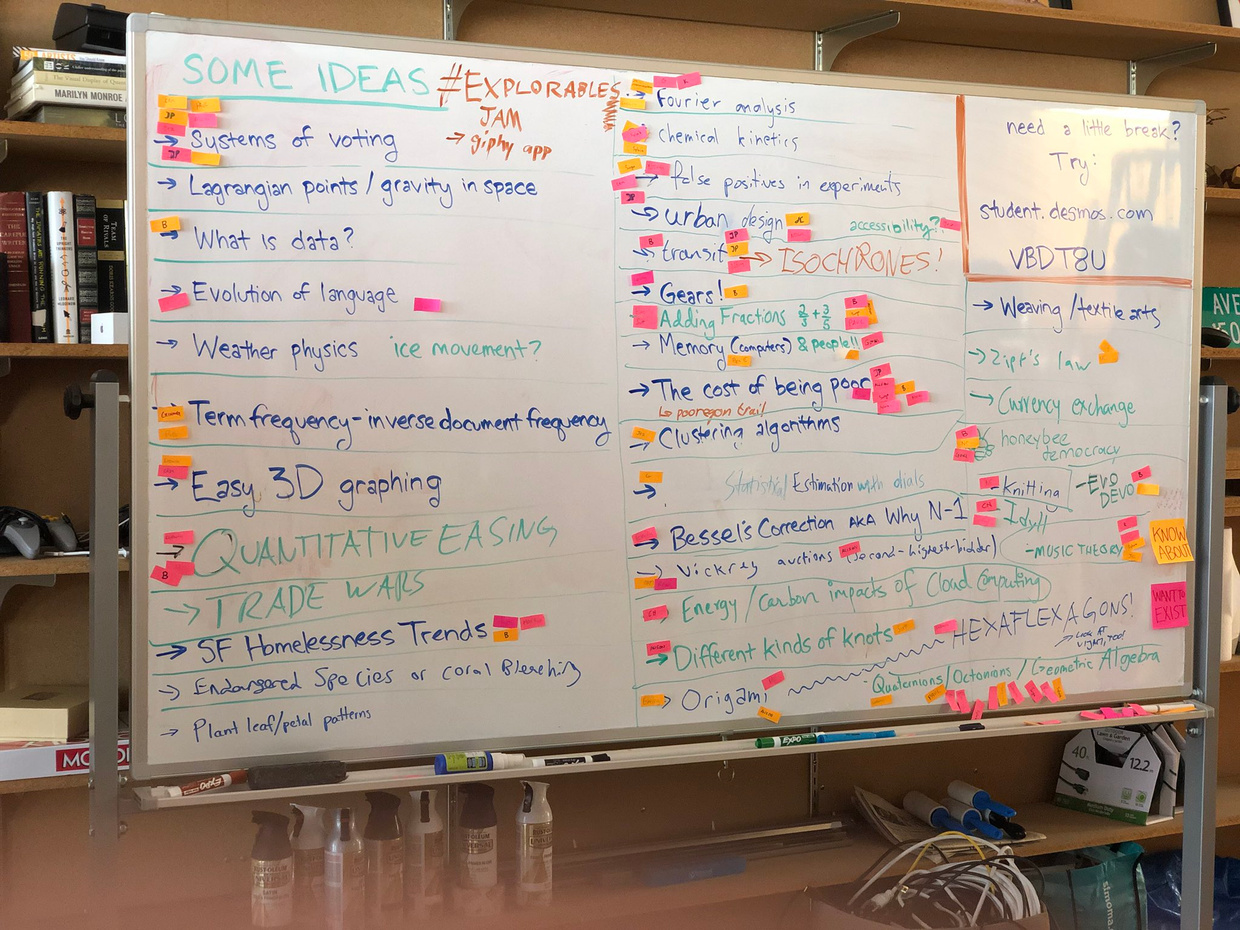 There were videos recorded of the lightning talks & the mini-presentations at the end. (We'll post these online eventually!)

In the meantime, though, the jam is still going! This was just the in-person kickoff event. The full jam runs for three weeks online, and ends Aug 19, in one week. I'd like to highlight a few in-progress explorables that caught my eye: (at least, those with screenshots posted online)

I'm excited to see how all of these turn out! A dozen-plus new educational interactives online, for all to play and learn from. You'll find them all after the jam ends, at: explorabl.es/jam

Thank you to everyone who made the in-person Explorables Jam kickoff a success! ❤️

After three weeks of jamming, peeps made 19 new small, playful explorable explanations! Here they are:

🎉 The Entries for the Explorable Explanations Jam! 🎉

There's a few I'd especially like to highlight, for doing something inventive with interactivity... (maybe I'll borrow their ideas for future projects!)

From Cells To Systems by SpacieCat

All about 1D cellular automata! Definitely more fun to read than Wolfram's 1000+ page tome. The unique thing this explorable does: you can change the simulation's rules by directly manipulating the simulation itself! (In contrast, almost all my sims have you change rules with sliders & buttons) I wanna see more sims designed this way!

Not only is this a good example of how to go up the ladder of abstraction step-by-step, but there's this interaction at the end: you explore the fractal by painting it. It's an effective way to build up the idea of a heatmap! (In hindsight, I'd wish I'd done that for Better Ballot.)

How To Make a Good Puzzle by Tom Hermans

There's comics about crafting comics (Scott McCloud), there's short films about crafting films (Every Frame A Painting), there's writing about crafting writing (Strunk & White)... why are there no games about crafting games? Well, there is now! I like the way this one embeds games inside itself, and contrasts good design & bad design. Also some of the puzzles are genuinely tasty-hard challenges.

This one's short and sweet, and has a really creative use of sound! In the simulation at the end, not only do you see a visualization of a chaotic number sequence, you hear it as well. You listen to math!

These are just a small sample of all the great stuff peeps have made for this jam. Again, you can play with and learn from all of them, here: explorabl.es/jam Enjoy!